I was supposed to bikepack the GAP and C&O trails from Pittsburgh to DC on my week of vacation, but a hurricane decided to crash my trip so after going through MANY backup plans I decided to still go, but cut my trip short.  I was having trouble finding a train ticket for my bike, finding a ride, finding hotels…etc.  After MUCH research I decided to start at Harpers Ferry where my dad dropped me off, bike to White’s Ferry and take the ferry across.  From there a shuttle would pick me up and take me to my hotel in Leesburg, VA.  The next day I’d take the shuttle back over to the C&O trail and continue into DC where I would spend the rest of the week cycling around the city.  I haven’t been to DC in….I can’t even tell you when the last time was.

ANYWAY Tuesday morning my dad picked me up and we drove to Harpers Ferry – which by the way has no parking.  We drove around trying to find a place to pull over and unload my stuff that was still close to the bridge I would have to cross.  We ended up pulling over along the main road into town and loading everything up on my bike.  Then I was off on my solo bikepacking adventure!

Before I could get to the trail I had to cross a bridge and carry all my things down the spiral staircase.  I was dreading this and tried everything I could think of to start my trip elsewhere, but it just wasn’t working out – and then I figured it would be a good challenge.  I walked my bike across the bridge and over to the stairs and then started lugging my panniers down the steps.  A kind person offered to carry one of my bags down the steps – YES!  My bike was the trickiest part of all, but even that wasn’t as bad as I thought it was going to be – just took it slow and steady and mashed on the breaks as I walked it down.  I would never want to carry it up those steps.  When I was bringing my bike down I looked across and could see my dad sitting in his car on the road making sure I was ok.  I may be a grown up but I think I will always be my dad’s little girl – and I wouldn’t have it any other way. 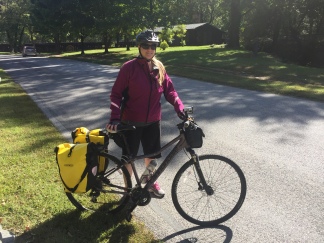 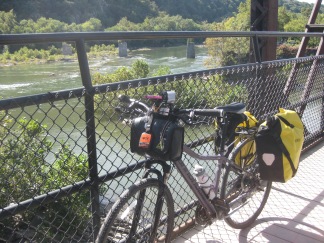 right before the dreaded stairs 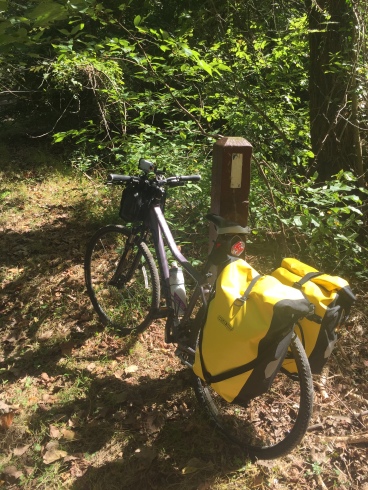 I got to bike part of the AT!!

Once on the trail, I set off – the weather was perfect, hardly any bugs, and I had plenty of time to cycle to the ferry.  The C&O trail parallels part of the Appalachian Trail for a bit.  I took my time cycling down the trail and getting used to the weight of the panniers on my bike.  There were way more people on the trail than I thought there were going to be for a Tuesday in October, but not so many that it felt crowded.  I took a few breaks along the way to check out the lock houses, watch a train go by and explore some hiker/biker campsites.  I heard it was very hard to pump the water from the pumps that were at every hiker/biker site, but to my surprise it was so easy – maybe I just happened to stop at a newer one?

Less than 1/2 a mile away from the ferry I was cycling along, enjoying the sights and sounds of the trail when I happened to look down, but alas it was too late – I rode my bike though an enormous pile of dog poop – I am not kidding, it was great dane sized and right in the middle of the trail.  I had no time to swerve, only time to look down as the feeling of horror overtook me while I watched that giant pile of dog poo SPLATTER EVERYWHERE all over my bike – it was unreal and I couldn’t believe that it didn’t get on me.  I grabbed some big leaves from some bushes and started trying to scrape the poo off my bike.  I got as much as I could off and then decided I would keep going and have to try to get the rest off later. 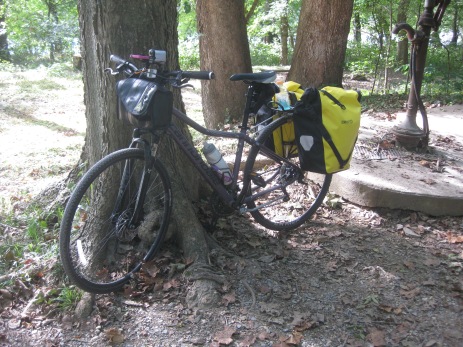 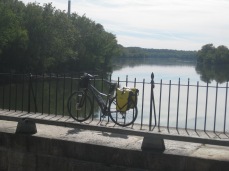 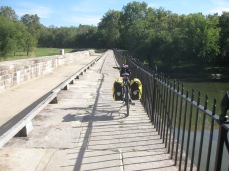 Shortly after I made it to Whites Ferry – I was so excited about this part of the trip!  They let the cars get on first and then bikers.  There were 3 other cyclists that were on the ferry and I was able to chat with them.  They paid my way ($2) which was so nice and then LUCKILLY they were heading to the same hotel I was.  My phone died, but they already called for the shuttle to the hotel to pick them up, they were able to call back and add me.  We had to wait an hour until the shuttle came and we thought about cycling to the hotel ourselves.  While we watched the ferry cross time and time again, we chatted about how they were doing the whole trail and had to cycle through the rain from the hurricane.  They also told me their wives were along and drive to meet them at each place they were spending the night – how cool!  Another bonus was that they didn’t have to lug all their belongings with them – lucky! 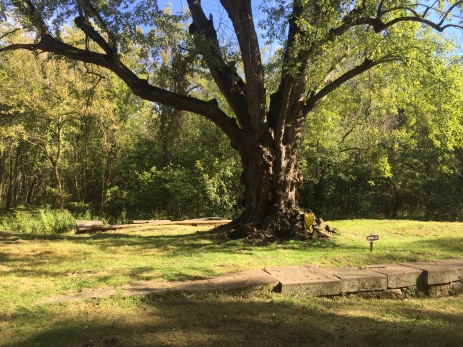 can u spot my bike? 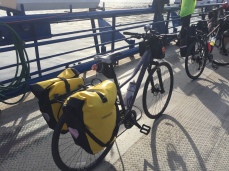 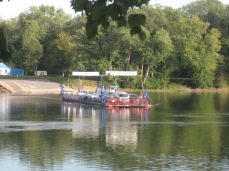 When the shuttle took us to the hotel we were really glad we decided to wait for it because we would have had to ride on some really busy roads – I wouldn’t recommend it.  We got dropped off in the front of the hotel and the shuttle driver got the hose out so I could try to get all the dog doo off my bike, but getting caked in dog poo out of the tread of a tire with a weak garden hose is a battle that you will lose every time – so I did my best, checked in and they gave me some scrap towels to place under the wheels of my bike.

I got cleaned up, walked over and had dinner at a Mexican place that was yummy – except the salsa was brown which freaked me out a bit, and then headed back to my room to turn in for the night.  I went to sleep proud for being able to get up and go by myself and excited to see what the next day would have in store for me.

I could get used to this solo adventuring thing!  🙂

In case you are interested I also started a youtube vlog about my trip – here’s the link for the 1st episode – new episodes every sunday!

Last errand for the #errandonnee challenge- cycle to my nephews art show! All thumbs up with my other nephew 👍 🚲😊
Fun day for a bike ride to get a snack with my mom and nephew!
Got a few more errands done today for the errandonnee challenge! Cycled for lunch, to pic up pics, and to mail some letters! Can you believe some things still have to be done via snail mail? 🤔🚲 🐌
Cycled to Music Bingo today- the rest of my crew dropped me off down the trail and I raced them there- I lost 🤣🚲 💨
Today’s bike commute to work and to get my hair done! Gotta keep some of it purple to match my bikes! 🤣🤷‍♀️ PS I found more murals!!!
Pretty flowers, TONS of deer, and a smashed up bike rack @sheetz - but that didn’t stop me from getting dinner on my bike commute home! 🤣🤣
Good morning from my bike commute 🌞#errandonnee #errandonne2020
1st bike ride of the year! A little chilly and windy, but fun! 🚲💗
Had a fun walk today for #optoutside day even though the rest of the usual crew that goes w me is sick 😷
found a new mural!! 😍🚲 or maybe it was always there and I just never saw it because there are so many
Today’s bike commute- I get soo excited when I am able to spot them 😊
Oh so pretty!!! Leaves falling all around! Such a great day to bike commute in PA! 😊💗
Dreaming of this place on this rainy PA day
😊 beach+ treats+doggy ice cream = JoJo has the best week ever!! 🐾💗
Assateague is one of my favorite places in the world- I was soo excited to catch this guy hanging out by the sign Friday- he was actually scratching his butt on it but I wasn’t able to get a video of that 🤣🤣
Such a pretty day for a hike!
I just can’t get enough of these murals!
💗🚲