Since it was too hot to go backpacking and I cancelled the trip I was supposed to go on to do the MD section of the AT I was trying to find something else to do – I was 1/2 joking when I said to my dad “wanna go on a road trip to get the OH and IN state highpoints,” but he said sure! WAHOO!  Last minute road trip!!! 🙂

So early Sat am we jumped in the car and headed out west.  When we plugged the coordinates into my GPS it said we would arrive a little after 2:30- this made us very nervous because on summitpost.com it says the OH HIGHPOINT is only open until 3.  We knew we didn’t have much time to spare.  My dad wanted to take the turnpike most of the way but my GPS kept trying to redirect us off the turnpike.  “I’M NOT GOING THAT WAY!!!! What is it @!*•! doing!?!???” I said “idk dad but it’s just gonna try to keep redirecting you- do you want me to put it on mute if you know where ur going?” He shouted “I KNOW WHERE I’M GOING TIL I GET THERE!!” Which I thought was hysterical- after a few more times of listing to my GPS say “recalculating” and a few more curse words from my dad, I checked the settings- somehow it was checked to avoid toll roads- ah HA! Problem solved- and it also reduced our driving time and said we should get to Campbell Hill at 1:45- much better!!!

So we continued our drive –  I just have to rant a little here- we stopped at a rest area on the PA turnpike and was never more disgusted- I took JoJo for a walk in the grassy area and it was like no one felt like picking up their dogs poo- seriously- it was NASTY!!! So I pick up Jo’s after she goes (leave no trace!!!) and go to throw it out and there is a bench next to the trash can- WITH A PILE OF SOMEONES TRASH RIGHT NEXT THE THE TRASH CAN!!!! Seriously not even 4′ away- nothing annoys me more that that kind of laziness- so your welcome a hole- I picked it up for u and threw it out since it was too difficult for you to do. UGH!  But I did see a bunch of monarch butterflies so that was pretty awesome!

So after we were done getting a few snacks we hopped back in the car.  I have no idea where my GPS was trying to take us but it was trying to put us on some side road 25 mins BEFORE Bellefontaine- I knew this wasn’t right so we just went with the instructions I found online :

From I-70 West take exit 93 to merge onto I-270 North towards Cleveland. Take exit 17B off I-270 to merge onto US-33 headed west. Take the OH-540 East exit for Sandusky Ave. A half mile down the roadyou will find a school on the right side of the road. This is your destination. (From tripadvisor.com)

It was really strange turning into the school parking lot- we just kept driving straight past all the buildings- you will see one at the far end of the lot that says Animal Care – head towards that and then up a little hill and around to the right.  There is a small circle of parking spaces there- we weren’t sure if we were in the right place but then I spotted a small sign in between 2 giant metal buildings:

It was only 2:00 and no one was around!  I was so happy we didn’t drive all that way for nothing – it is not open to the public on Sundays and the whole place appeared to be fenced in. 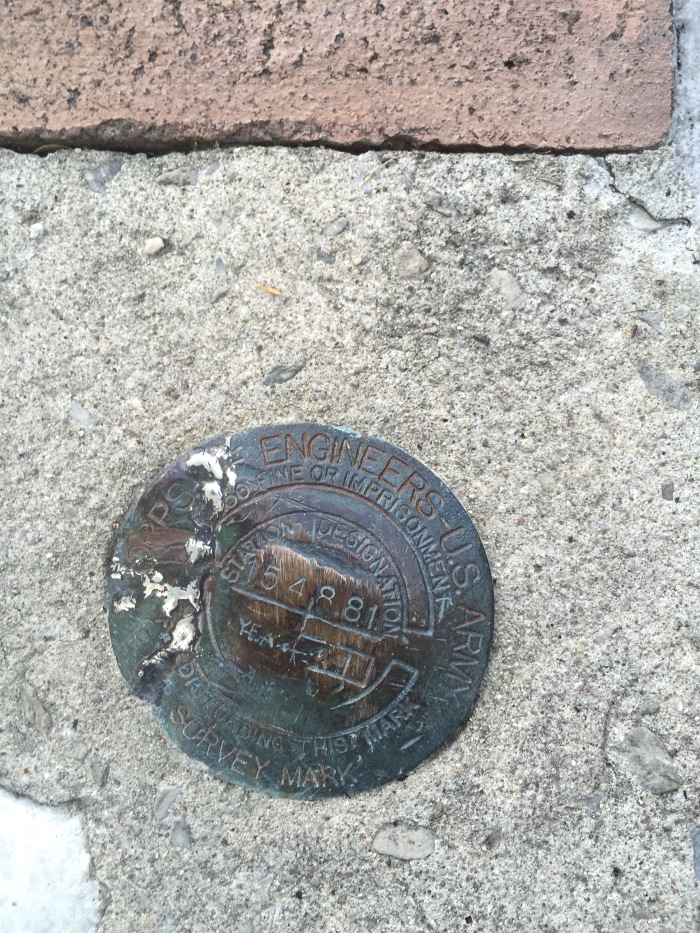 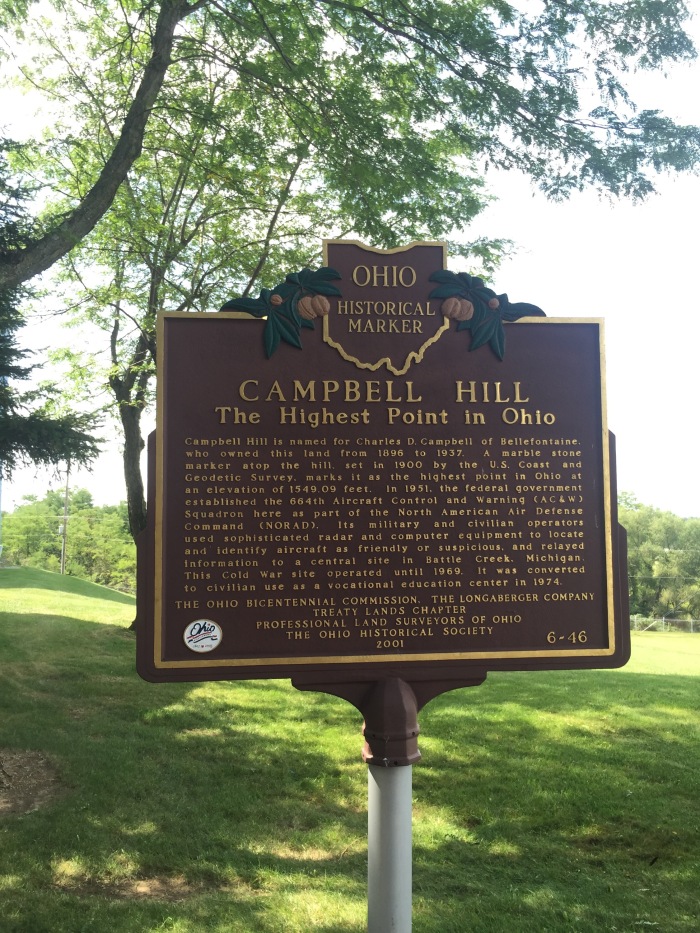 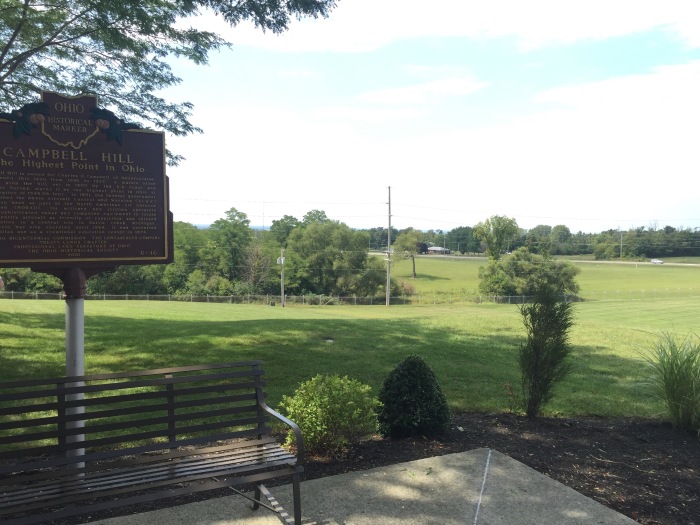 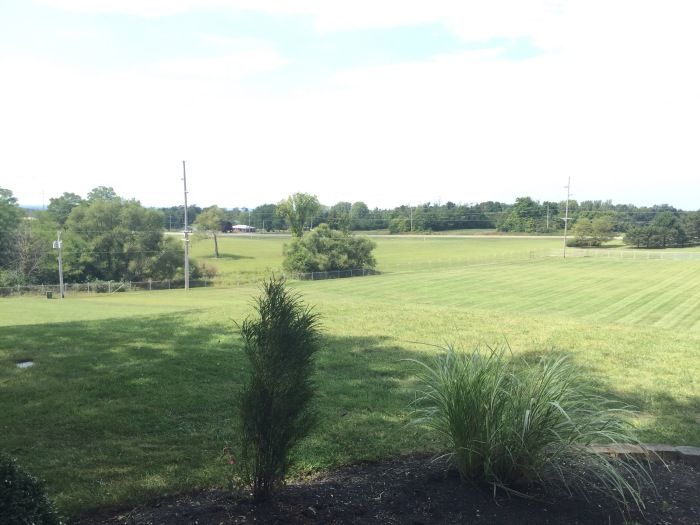 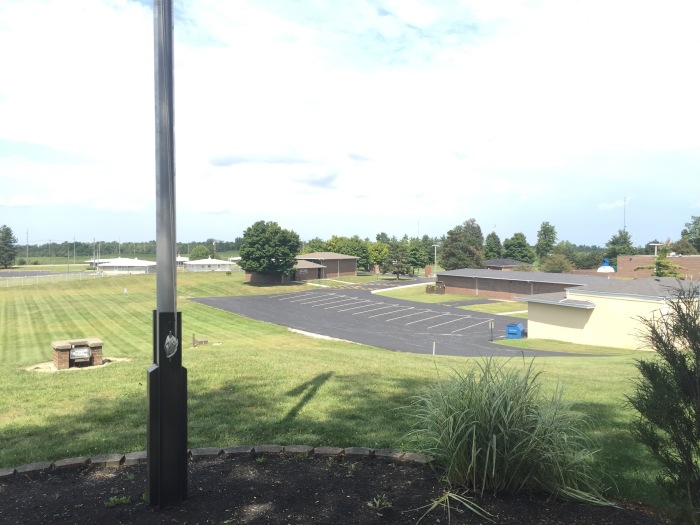 After we were done with the pictures we decided we may as well get Hoosier Hill in Indiana today too since it was still early and that was only about 2 hrs away -we were originally going to get that one Sunday and then head back home.

We also passed a sign that stated Bellefontaine was the 1st place to have a cement road- before that all the roads were just dirt- pretty interesting- I had read online that the original street is somewhere in town, but we couldn’t find it as we passed through- you must have to turn off the road we were on somewhere. 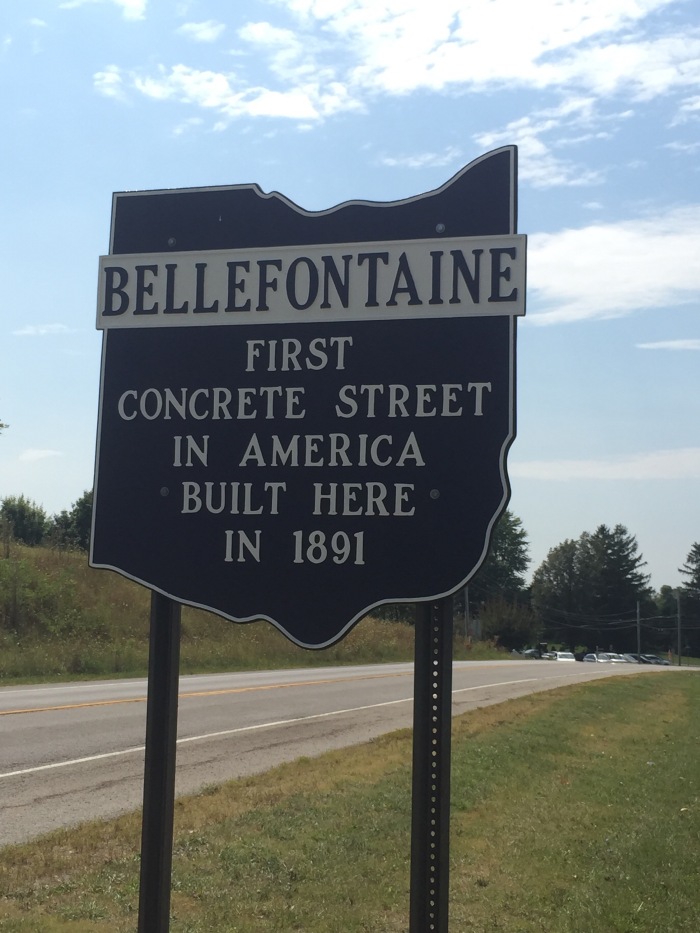 The drive was very pleasant through flat land with some gentle rolling hills – there was corn growing as far as you could see for most of this ride.  My GPS took us the back way, which had a few signs to direct us:

After this sign we made the left turn and drove down the road a bit- we reached a road crossing and thought ‘this doesn’t seem right’ the road crossing was for Bethel Rd and I knew in the directions from online it said to turn rt off Bethel onto Elliot and go for about a mile- so we realized we passed it- I said “I bet it was that short dirt road we passed right when we turned left onto Elliot.  We turned around and sure enough there it was – in between a corn field and a stretch of woods. 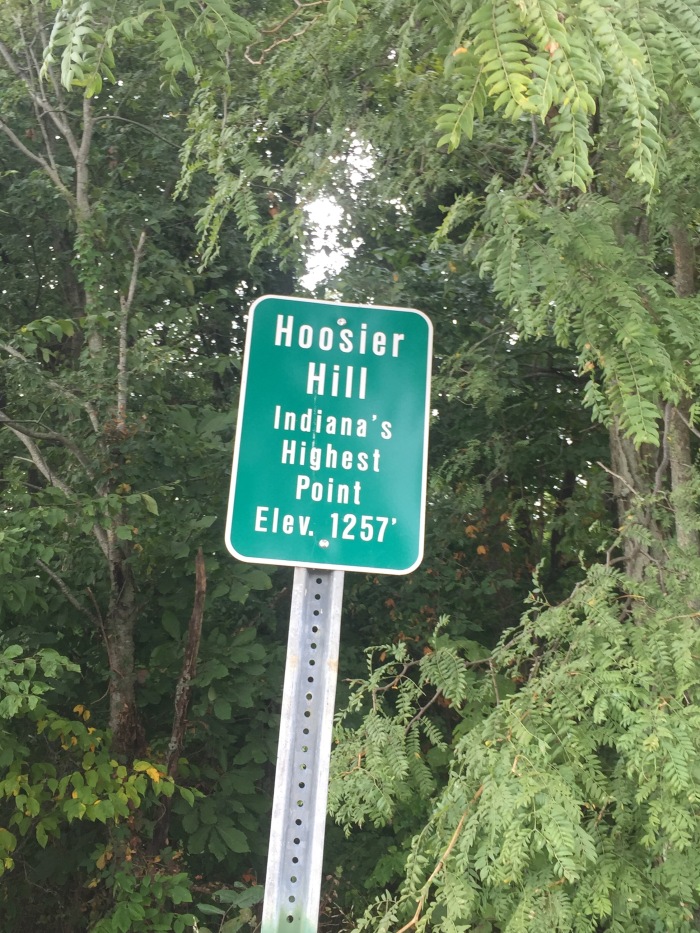 As soon as we get there it started DOWNPOURING!  I snapped a few pics and we ran into the woods and up the short path to the highpoint of Indiana- Hoosier Hill!  Luckily the trees acted as a sort of natural umbrella!  It was a really cute little area that you would never know was there unless you were looking for it.

Hoosier Hill is on private property so please respect this area so future highpointers will be able to enjoy it!!

We walked all around trying to find a USGS marker, but couldn’t see one anywhere.  It started to rain even harder so we decided to head out.

We briefly talked about heading over to Charles Mound- the highpoint in Illinois as it is only open a very few weekends per yr – it is also on private property and this weekend happens to be one of the few it’s open, but it would have been a 7 hr drive.  My dad wanted to head home and I was happy to have snagged 2 so I wasn’t gonna complain!  I can get that one next year!!

We drove for a few hours and then got hungry and tired.  The area we stopped had a ton of hotels but only 2 were dog friendly- of course they were the last 2 we looked at- haha!

Now Jo is passed out on the bed with me- using my foot as a pillow- which isn’t very comfortable for me, but she sure is cute- and it’s her birthday so I’ll allow it- so happy 3rd bday to my Joey girl!!!!  I think she had fun- I couldn’t find any place to get her ice cream though so I owe her one!! 🙂

Great road trip- this make 13 highpoints for me! Wahoo!!

Ps- this is how much JoJo likes my dad’s audiobooks: