I had a deal with my sister that when my nephew turned 3, I would take him on his very first camping trip! We would start with backyard camping in their backyard – the same as I did with my other nephew. I figured if we did everything the same, he would love it as much as his cousin right?

END_OF_DOCUMENT_TOKEN_TO_BE_REPLACED

If you have been reading my blog for awhile, you know I love to go to Assateague Island when I can.  JoJo and I headed down after work because I snagged a campsite at the National Seashore.

END_OF_DOCUMENT_TOKEN_TO_BE_REPLACED

I have had a lot of people ask what I brought with me on my bikepacking trip so I figured I’d put together a quick list.  The following items are what my nephew and I brought for our overnight trip.

going through the Howard Tunnel

END_OF_DOCUMENT_TOKEN_TO_BE_REPLACED

I have been TRYING all summer to take my nephew on a camping trip, but it just hadn’t been working out and has been extremely hot lately.  I have also been wanting to try bikepacking for a while so I decided to see if my nephew would be able to come on a short trip with me – win win right?!  🙂

In case you don’t know what bikepacking is, it is like backpacking except you load up all your camping gear in panniers (bags that attach to your bike) so you don’t have to carry it on your back….which I probably should have explained to my sister because she mentioned she was trying to fit his sleeping bag into his backpacking bag.  I had to laugh at the image of my nephew riding his new bike down the trail with his giant backpacking pack on his back.  I reassured my sister that I would be carrying everything on my bike and he could just focus on riding his.  🙂

I decided to take him on the York Heritage Rail Trail – which is a trail I have ridden a few times before.  The plan was to park at Glatfelters Station Parking Lot around mile 13 and then we would bike Indian Rock Campground which is right off the trail around mile 18, camp overnight, then bike back the next day.  This seemed like a reasonable distance to go for an 8 year old on a new bike and myself hauling all the gear – and it is a FLAT trail which is a plus!

END_OF_DOCUMENT_TOKEN_TO_BE_REPLACED

I can not say enough great things about this campground and State Park – I love it here.  This trip was not the first and certainly won’t be the last time I will visit.  The campsites are large with a picnic table, fire ring and room to park your car.  There are flush toilets, warm showers and electric in the bath house.

I brought my friend Cathy with – this was her first camping trip and she LOVED it.  We were driving up right after work so I called and told them we would most likely get there late.  They told us that wouldn’t be a problem, just to set up when we got there and check in in the morning.  We ended up arriving at 9:30 which meant unfortunately it was dark.  Setting up the condo (as my tent is lovingly nicknamed) in the dark is a pain – actually setting up the condo in the day time is sort of a pain because it’s so huge and old.  As we were putting it together we noticed one of the tent poles was missing the hollow metal end that fits into the peg attached to the tent – bummer!  We couldn’t find it anywhere so we ended up rigging that side of the tent up with extra stakes and the ring attached to the tent that the stakes go through and trying to jam the pole in the hard ground – hey it worked – even if it was a bit lop sided!

END_OF_DOCUMENT_TOKEN_TO_BE_REPLACED

Watkins Glen State Park is one of my favorite places to visit.  The campgrounds are wonderful, bathrooms are clean with flush toilets and running water, and the hiking trails are great.  The best trail is called the Gorge Trail and is the one that everyone comes to hike.  The trail is carved right into sides of the gorge and goes up over 800 steps over about a mile and a half.  It goes over, under and through 19 waterfalls along the way.  Although the waterfalls weren’t flowing as much as I have seen in the past, it was still an extremely beautiful place to visit!

the bottom of the gorge trail 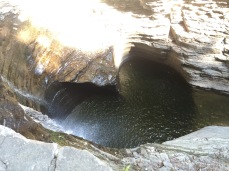 END_OF_DOCUMENT_TOKEN_TO_BE_REPLACED

Hello all!! Just wanted to share some awesome news with you- meet my new adventure buddy!!  WELCOME TO THE WORLD:

My nephew was born yesterday at noon.  Isn’t he adorable?! 🙂

END_OF_DOCUMENT_TOKEN_TO_BE_REPLACED

Just wanted to say THANK YOU to everyone who has been reading my blog – it has been really awesome to chat with so many people who are into the same interests as I am.  🙂

END_OF_DOCUMENT_TOKEN_TO_BE_REPLACED

I am a HUGE Survivor fan so when a friend (Sara) invited me up to her cabin to have a survivor weekend I didn’t hesitate to say yes.  Her family was also really into Survivor and believe me they went ALL OUT for this weekend.  She told me that her parents set up actual homemade games inspired by the show with tribes, immunity idols, eliminations and all.

I drove up with Sara and a few other friends.  Let me tell you, her lovely parents spent so much time and energy into making this weekend as authentic as possible for us – her mom even carved the immunity idol herself – making a bear out of a log with a CHAINSAW!!  It was awesome!  Oh and Sara made fake immunity idols for us before we got up there – we never did get to play them – LOL!

END_OF_DOCUMENT_TOKEN_TO_BE_REPLACED

I have some pretty weird food allergies – carrots and watermelon (actually I’m pretty sure all melons – I don’t really care for them anyway, but I do have a reaction whenever they are mixed into fruit salad.)  I just avoid these foods at all costs, especially carrots as they make my throat swell up if I eat enough of them.  You never realize how much a particular ingredient is used until you become allergic and have to check EVERYTHING.  Carrots are used as a filler in A LOT of different foods – so I just check the ingredients of anything new I try.  Try being a vegetarian and going to salad bars, then seeing they use pre packaged mixes that already have carrots in them.  They are in a lot of vegetarian foods, some drinks listed as FRUIT juice, and they even use carrots in some energy gels – I’m telling you they show up in the weirdest places!