I have been TRYING all summer to take my nephew on a camping trip, but it just hadn’t been working out and has been extremely hot lately.  I have also been wanting to try bikepacking for a while so I decided to see if my nephew would be able to come on a short trip with me – win win right?!  🙂

In case you don’t know what bikepacking is, it is like backpacking except you load up all your camping gear in panniers (bags that attach to your bike) so you don’t have to carry it on your back….which I probably should have explained to my sister because she mentioned she was trying to fit his sleeping bag into his backpacking bag.  I had to laugh at the image of my nephew riding his new bike down the trail with his giant backpacking pack on his back.  I reassured my sister that I would be carrying everything on my bike and he could just focus on riding his.  🙂

I decided to take him on the York Heritage Rail Trail – which is a trail I have ridden a few times before.  The plan was to park at Glatfelters Station Parking Lot around mile 13 and then we would bike Indian Rock Campground which is right off the trail around mile 18, camp overnight, then bike back the next day.  This seemed like a reasonable distance to go for an 8 year old on a new bike and myself hauling all the gear – and it is a FLAT trail which is a plus!

As we were driving to the trail I asked him what he did before I picked him up.  “I’ve been practicing riding my bike….I jumped on the trampoline…..and….I pooped an AWFUL lot today.” he answered.  I could not stop laughing!!!!  Everyone told me how much he was practicing riding his bike because it’s a little big for him, but no one told me he’s been pooing a lot!  HAHA!  All this before 3 PM – what a life!

Also on the way I heard a loud CLANK and I was worried something fell off my bike – he looks back and says, “Well, it still has 2 wheels so it’s ok!” So true.

We arrived at the parking lot, loaded up all our stuff and headed off on our adventure!

I decided to leave the speed of the ride up to him – he kept asking me “Am I going too slow?”  “No, you’re good!”  I’d say.  It didn’t matter how long it would take to get there – we had nothing else planned!  I have to say it took a little getting used to the extra weight I was carrying and it sort of changed my balance a bit.

We got off our bikes and walked across the road crossings and only took one short break on the way to the campground.  I emailed them prior to our trip to get more info and they told me the easiest way to get there was to make a right onto Indian Rock Dam Road and go about 200 yards.  I was worried about taking him on the road after seeing a few roads we crossed had very step hills – but luckily the road there was fairly flat, although a bit busy, with a sign directing us where to turn.

going through the Howard Tunnel

I read a fair amount of bad reviews about this campground, so I was a bit worried about how my experience would be.  I know someone (Hi Bobby!) who stayed and had no complaints so that reassured me.  My only complaint is that a campsite was $25 and I paid with $30 and was never given change, but didn’t realize it until a few hours later when I thought about going up to check out the vending machine – I didn’t realize because I was handed a form to fill out to complete check in and then another paper stating the rules of the campground.  Other than that we really enjoyed our stay – big campsites with picnic tables and fire rings, and a nice clean bathroom with showers and flush toilets.  We were told we could have our pick of whatever campsite we wanted.  We wandered around and found what we both determined was by far the BEST campsite – right by the stream with log stools around the campfire.

check in at Indian Rock Campground

We set up camp pretty quickly, made dinner, and played cards.  I brought Uno and Spot It (the camping version).  We had fun playing until dark, then read a bit before drifting off to sleep.  You could hear the traffic from the nearby road which seemed to be quite busy all night, but I still managed to get a good nights sleep despite it.

In the morning we made breakfast, packed up and headed back to the car.  I was really happy there was a water bottle refill fountain about a mile away from the campground because it was so hot and we were almost out of water at that point. 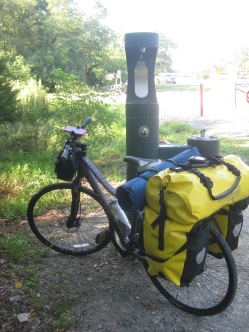 end of our trip!

My nephew did awesome on this trip – I am sure he could have biked farther.  Just the look of pure joy on his face while biking and helping me around camp was the best.

I would highly recommend this trail if you are going on your first bikepacking trip or taking a little one.  There are multiple parking lots along the trail so you can ride anything from 1 mile up to 40 miles – and it’s a rail trail so it’s fairly flat the whole way.