I’m not quite sure why it has taken me so long to blog about my road trip with my dad – we had such a great time and ended up getting 8 state highpoints in like 6 days – I really doubted it was possible.  This blog post is going to be an overview of the entire trip – I will write an entire post for each highpoint (eventually).

My dad and I studied the map for all the highpoints and decided to head out and get as many as we could with the time we had.  It was rainy when we left and I just threw everything in the car right after work and took off to meet my dad.  We had been on the road for about 2 hours when I realized I forgot all the dry food I had packed – I grabbed the cooler, but the bin w/ all the bread, cereal, etc was still on the dining room table.  CRAP!  Well, I figured we could just grab what we needed along the way, there was no point in going back for it.

We kept driving and we started talking about where we were going to camp that night – and then I realized I forgot the tent….what on earth.  We had EVERYTHING else for camping, except the tent.  I had moved it to a different spot while I was packing and then just left it – strike 2!  I may be the worst camper ever… LOL

The first day we hit Black Mountain Kentucky – which was a bit boring to be honest.  Then off to Clingmans Dome, Tennessee – which was a super steep hike, but totally worth it.  I had a lovely day and the views were amazing – and of course it was packed with people.  We then headed into Gatlinburg and saw the Aquarium of the Smokies – this place is a must see!  They had a whole section that was in a long tunnel underwater – it was amazing! 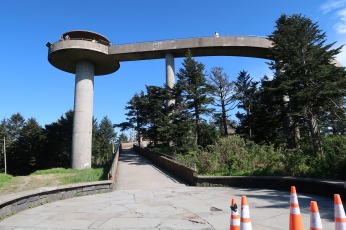 The next day we headed to Woodall Mtn, Mississippi – which was a piece of cake.  We spent a little bit of time there and my dad decided to pick up a bunch of trash that had been thrown around the area.  He found a note stating “FUCK YOU HAVE A NICE DAY!”  We could not stop laughing about that – it was pretty random and I think my dad secretly likes finding curse words at the different places we visit.  But the laughter soon turned to tears as we drove away and heard a crash – I immediately realized it was my action cam and gimbal (a camera stabilizer) that I placed on top of the car after mentally telling myself to remember it several times – and then just flat out forgot anyway.  My dad stopped the car and reversed until we began to see pieces of it smashed all over the road.  I literally owned the gimbal for 2 days and got it specifically for this trip – awesome. 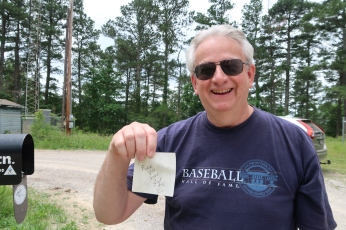 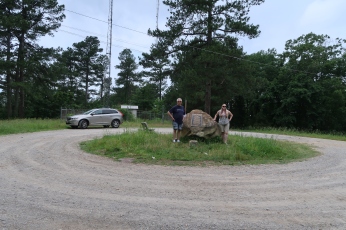 Nothing could be done for the shattered gimbal, but I later found out that despite the fact that the action cam door was 1/2 broken on the back, the lens had a chip out of it and it was completely scratched – it surprisingly still worked!

We continued our trip back into north western Alabama where we stopped at my cousins house for their daughters graduation party.  After spending some time there, we were back on the road – and I was on the hunt for boiled peanuts which I am told is a must try in the south although it is an “acquired taste.”  We asked a few places and we were told “oh no, that’s a southern thing.”  I was so confused, because to me we were already IN the south – we were only a few hours away from the Gulf of Mexico…sooo….I didn’t get it then and I don’t get it now, and couldn’t find boiled peanuts really anywhere in Alabama no matter how far south we went.

The next day we were off to Britton Hill, Florida – the lowest highpoint in the US – and one of the buggiest.  We didn’t stay here long before checking out Lake Jackson which was beautiful and then headed up to Cheaha Mountain, Alabama. 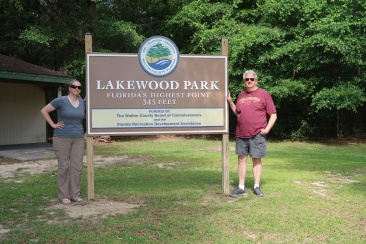 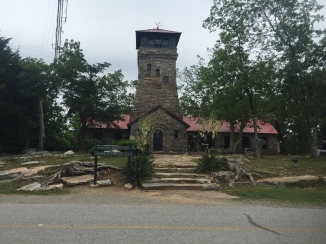 I noticed we were really close to Amicalola Falls which is the approach trail to Springer Mountain (the start of the Appalachian Trail).  Since I can never resist seeing a waterfall and love anything having to do with the AT we decided to stop and check it out although it was getting late.  The views of the falls were awesome.  We checked out a map and saw we could drive to various points along the falls (bottom, middle, and top) get out and hike around a bit.  We opted not to do all the steps as it was getting late.  When we parked at the middle section of the trail I grabbed my camera and we headed down to the waterfalls.  I went to pull it out of it’s case, the wrist strap got snagged on something and it slammed to the ground.  WTF -I just started freaking out while I picked up the camera and realized the lens was bent and stuck in the extended position.  It would turn on, but then say error and shut right back off.  THIS IS THE 2ND CAMERA I BROKE IN A 24 HOUR TIME PERIOD.  To say that I was upset is a bit of an understatement.  We were in the middle of nowhere with not a Best Buy around for hours.  I didn’t realize that my action cam was still working at this time.  It’s not like it was a dinky camera either – it was a G7X Mark II – one of the nicest and most expensive cameras I have ever owned – which I got for my b-day only 5 months before this trip.  It was an awful feeling and I knew Kevin would think I was kidding that I literally broke all my camera gear in a 24 hr period.

We ended up visiting the rest of the areas of the falls while I took pictures with an iphone – which does not compare to the 20 megapixels of the G7X, but we won’t go there… 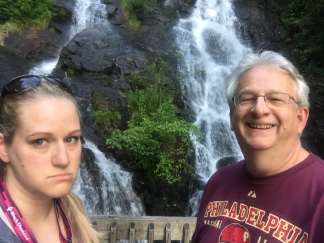 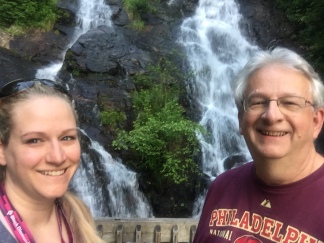 still having fun with my dad despite all the mishaps 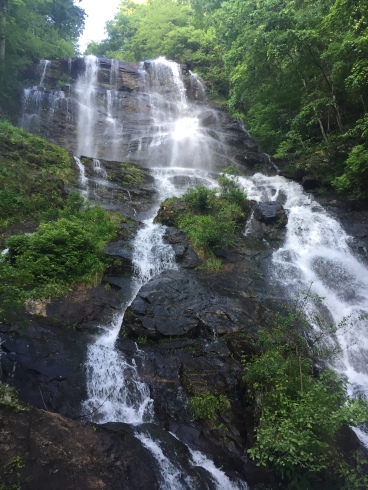 Then to top it off when we were leaving Amicalola Falls and I’m sniffling in the car, trying to hold back tears I hear my dad exclaim “HEY! BOILED PEANUTS!!”  Not in the mood….LOL.

The next morning we checked out some ancient rock carvings at Track Rock Gap Petroglyph Site before heading off to Brasstown Bald, Georgia, then Sassafras Mountain, South Carolina, then to Mount Mitchell, North Carolina. 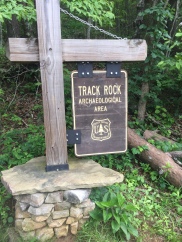 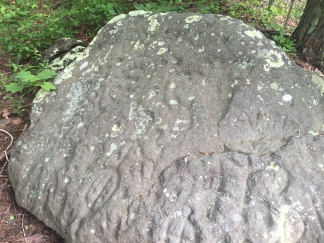 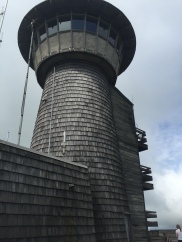 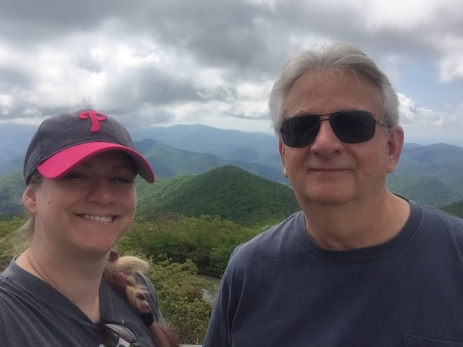 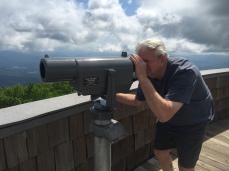 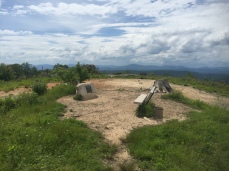 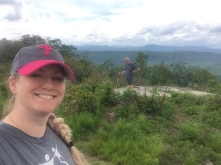 On the way home we decided to cook some of the spaghetti I pre-made.  When we went to eat it we realized the bin I always bring with camping supplies was mysteriously missing the giant bag of silverware – so we had to eat with the spatula and a ladle!  We were cracking up laughing because it was just one more weird thing to happen on this trip. 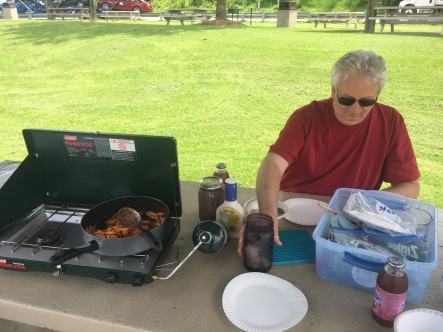 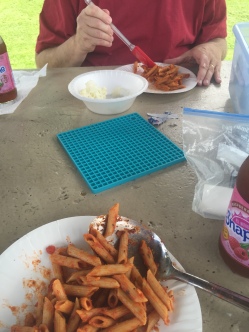 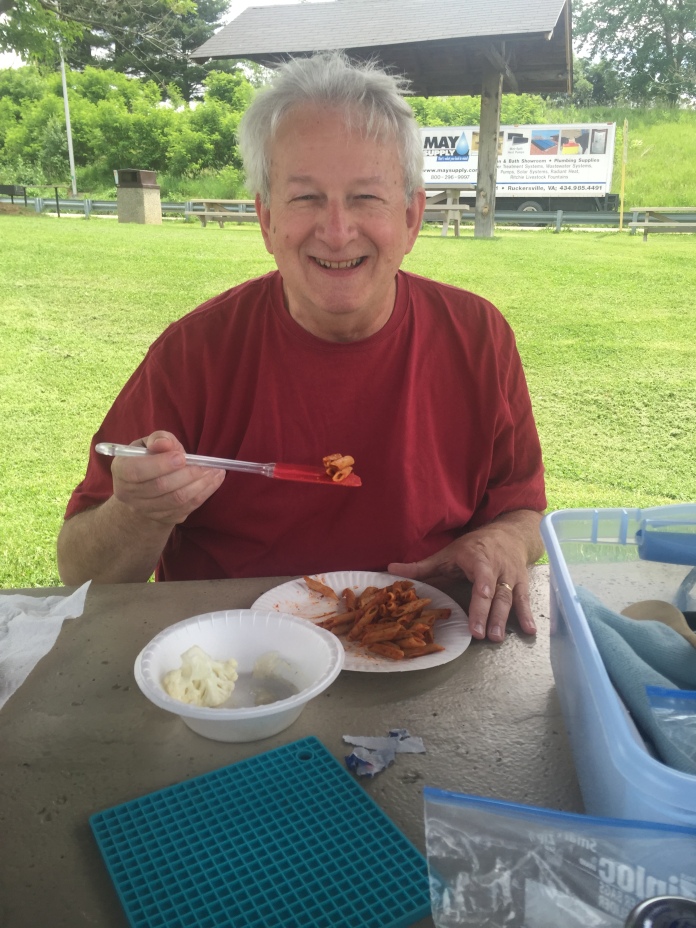 this pic makes me giggle every time

We made it home safe and sound – very surprised at all we were able to do in such a short time – overall it was a great trip!