I love anything that has to do with The Beatles, so when I saw there was going to be a Beatles themed escape room I was all for it.  I had never done an escape room before so I had no idea what to expect.  I saw the tickets were selling out quickly so I rounded up a group of fab-four family members (plus my little nephew who was our mascot) and we headed over to Ridgewood Winery in Birdsboro, PA to check it out.

First I have to say Ridgewood Winery was beautiful.  It is actually a Nationally Registered Historic Site – I absolutely love looking at old buildings.  We stepped inside and were greeted by our guide for the Magical Mystery Tour.  We signed in and were taken upstairs to a room and explained the rules:

We started with the math problems which Kevin flew through – and even got the bonus question which took 2 minutes off our time.  We then went over and found the jar of jam on the table, but guessing the spice that was added was an optional task that would again take time off our end time, but we couldn’t guess what it was.  We moved on to the word puzzle which we found in a book.  I LOVE word puzzles so I took the lead on that while my sister and Dad tried to figure out the spice puzzle.

When the word puzzle was done we moved on to the next part which was to find a few hidden phrases with the blacklight flashlight my dad and sister found.  This eventually led us to another book with a puzzle to match the Beatles with a list of women each of them had dated – my dad knew all of these but 1 which I looked up via cell phone.

Once we read off the list, our guide stopped the timer and asked us if we wanted to keep going to try to guess the spice or quit.  She couldn’t tell us if we were ahead, but did say we had a very good time at 26 minutes.  We decided to keep our time as we felt we had guessed every spice on earth – every spice EXCEPT ginger which our guide told us after we said we were happy with our time.

Then we were able to check out the winery and sample a few of the wines.  They had an apple wine called Olde Orchard which was excellent – I ended up ordering a glass of that and a bottle to take home!  Oh and my nephew got to keep the fool’s hat!  🙂 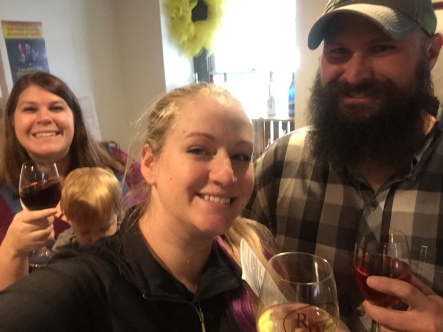 We had an absolute BLAST and I think I am hooked on escape rooms now – and apple wine! 🙂

4 thoughts on “The Beatles Escape Room at Ridgewood Winery”