Dark and early (I can’t really say bright and early because I was up well before the sun) Kevin dropped me off at Epcot and I made my way with the other runners to the starting corrals.  I felt a little more confident because I knew where I was going since I was just through it all the day before for the Marathon Weekend 5k.  I made my way through the crowd admiring the awesome costumes.  I kept the mylar blanket they gave me the day before for extra warmth while waiting to start.  The lines for the characters were outrageously long so I knew there was no point waiting because I wouldn’t have time to get a picture before the race started.  Little did I know that later in the run I would have a very comical “character stop”….

I went right to my corral and waited to start.  There was a constant crinkle from the mylar blankets most people were wearing as everyone huddled together to keep warm.  The same as the 5K, the first wave started at 5:30 AM and I started about 6:15ish.  I started running and even though I was sick I was able to keep a steady pace – although slow.

This was my Bill Nye the Science Guy day!  When I found out The Science Guy was a Disney show I was so excited and knew one costume was going to be Bill Nye themed.  I found this awesome t-shirt online plus a giant red sparkly hair bow on etsy to represent his bow tie and voila!  Costume complete!  🙂

I began seeing characters along the course and started debating with myself if I wanted to stop or not.  On one hand I felt like character stops were the whole point of doing a Disney run, on the other I was extremely worried about where the dreaded balloon ladies were and that I would get swept.

After debating for a while I decided the next line I saw I would stop no matter what.  It is hard to see who the characters were because the lines were so long. As far as I know there is no way to know ahead of time which characters are where on the course.  So for the most part you have to run up, see who the character is, and then run back to get in line.  The next line I saw was really long, so even though I decided that no matter what it was I was going to wait, I ran ahead to make sure it was a character I actually knew – and boy was I glad I did.  It turns out it was the line for the port-o-pots!  WHOOPS!

Chuckling to myself I continued running – I know there was no way that anyone could have realized my mistake, but I was still embarrassed anyway. 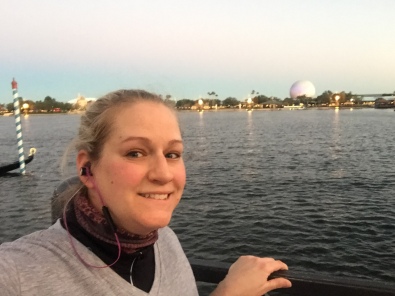 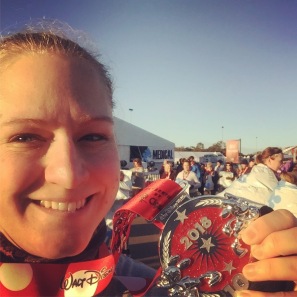 I enjoyed this course A LOT – after running a short time on some highways, we made our way back into Epcot, around the World Showcase and a few other areas.  The way the lights were twinkling all around and the excitement of the people was electrifying – I think this was my favorite race of the whole weekend!