I think I first heard of the One Day Hike from reading other blogs.  It is a non-competitive hike that is held every year.  People start at about 3 AM in Washington DC and hike up the C&O Canal ending just past Harpers Ferry, WV.  They have until midnight to complete their hike.  There is also a 30 mile option.  I wasn’t feeling adventurous enough to try either of those yet, so I saw they needed bike patrol volunteers.  This is something I wanted to try for a long time.  I often see cyclists at races, biking the course with runners.  Honestly, half the time that I am doing a race I am wishing for my bike anyway – so this seems like a pretty good compromise!  I contacted Frank, the coordinator, and requested a shift.

I was able to pick a shift starting in Brunswick, MD at mile 55 of the trail.  I chose this location because there is a campground nearby and since I had a 2 1/2 hour drive to get there I figured I would camp overnight and make a whole weekend of the event!  Kevin and JoJo came with me and we arrived at the campground by 2:30.  We set up camp and had time to relax before I started my shift at 5:00 PM.  From camp we could see the steady stream of hikers walking along the trail on their way to the end.

About 15 minutes before the start of my shift I headed up the trail to the Brunswick Support Station.  The sun was shining, the weather was perfect, and I had been looking forward to this since I signed up.  At the support station Frank gave me an official volunteer t shirt and vest and introduced me to Larry, who was my patrol partner.  We were given instructions to cycle down to mile 51, turn around and cycle to mile 60.7 (to the spiral stairs to Harpers Ferry) turn around, ride back to Brunswick which was a total of about 20 miles and then we would be done.  Our shift assignment was for 4 hours so we were to ride at a casual pace in order to help any hikers as we patrolled our section.  We were free to eat and drink whatever was offered at the support station as a thanks for volunteering.  After grabbing some water bottles I added them to the jelly beans and Swedish Fish I was carrying and we headed down the trail.

There were so many wildflowers blooming it was just lovely.  We rode slowly towards mile 51 asking everyone if they were ok.  Once we reached our turn around point we saw an old lockhouse so we decided to check that out before heading back.  We took a few pictures in between handing hungry hikers some jelly beans and water, then turned around and admired the wildflowers all the way back to Brunswick.  Kevin and JoJo were patiently waiting back at camp and I was able to wave at them each time I cycled by. 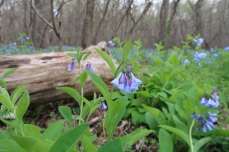 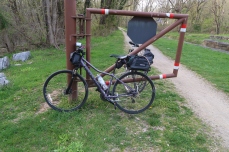 When we were back at the support station we loaded back up on water to hand out.  After a short break, we headed towards Harpers Ferry.  Along the way I spotted some sneakers that were on the side of the trail.  I didn’t know if someone threw them there to get rid of them or if they wanted them to change into at the end of their hike.  Larry grabbed them and tied them to his backpack.  We asked everyone we passed if they 1) needed anything and 2) lost a pair of sneakers.  Everyone said the shoes weren’t theirs and some even told us there was a pair thrown up in the trees.  We never did figure out the mystery of the shoes and ended up giving them to a volunteer at Harpers Ferry to take to the end just in case someone was looking for them.

We stood at the spiral staircase admiring the colors of the sky due to the sunset and cheered the weary, but still smiling hikers on as they made their way on their final stretch of the hike.  I would NOT want to hike 60 miles and then have to go up those steps!  After a few pictures we headed back to Brunswick.  The new light I got for my bike is like a beam of sun that cut through the pitch black of the now dark trail.  I had the light pointed down but one hiker ended up yelling at me that the light was too bright.  I didn’t take much offense as there was nothing I could do about it.  I got it BECAUSE it was that bright for when I commute in the dark (PLUS there was a German Shep in the ad – no lie!) AND I would probably be irritable too if I had been hiking for 20 hours.  Even with my bright light it was hard to see who was part of the hike and who was just out for a walk on the trail – a few times I yelled, “ALMOST THERE! LOOKING GOOD!” and then realized that they didn’t have a bib number on – oh well!  🙂

We arrived back at the Brunswick Support Station around 9:00 PM.  They told me they were open until 9:30 and I could see the last few hikers coming in from the trail.  I returned my vest, said my goodbyes and cycled back to camp.

I could not have been happier with the day – I got to go camping with Kevin and Jo, got to ride my bike on a beautiful trail in perfect weather, and got to meet some awesome people!  It was so much fun and I will definitely be looking for more places to cycle patrol.

As I rode up to camp I could see JoJo in the light of the campfire curled up on my camp chair.  She looked so comfy – I could tell Kevin and Jo had as good of a day as I did.  🙂

6 thoughts on “One Day Hike”