I’m not exactly sure what got me interested in hiking all the state highpoints.  I like hiking and seeing new places- so why not right?  So after much planning, my dad and I set off to conquer 3 state highpoints – that was the plan anyway.  I follow the Summit Chicks blog and got a lot of information about the highpoints from them as well as various other sites.  I saw that you could potentially get 3 highpoints in 1 day – WV, MD and PA.  Always up for a challenge, I started making plans for a road trip with my dad and JoJo.  We saw that Skyline Drive was fairly close to Spruce Knob, the West Virginia highpoint and I have always wanted to see Shenandoah National Park so we decided to take the scenic route to our 1st highpoint.

We headed out- it was pretty chilly, but the sun was shining and my dad is always good company.  We planned to do the entire Skyline Drive, but it took us WAYYY longer than we thought due to the fact we kept jumping out to take pictures – the views were absolutely breathtaking! 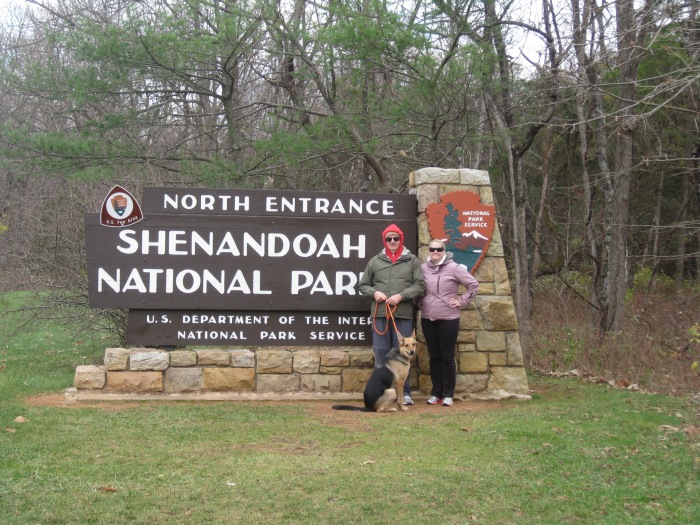 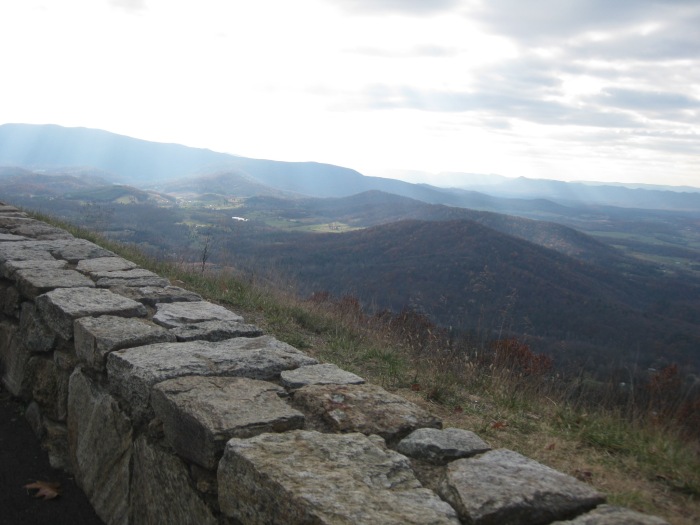 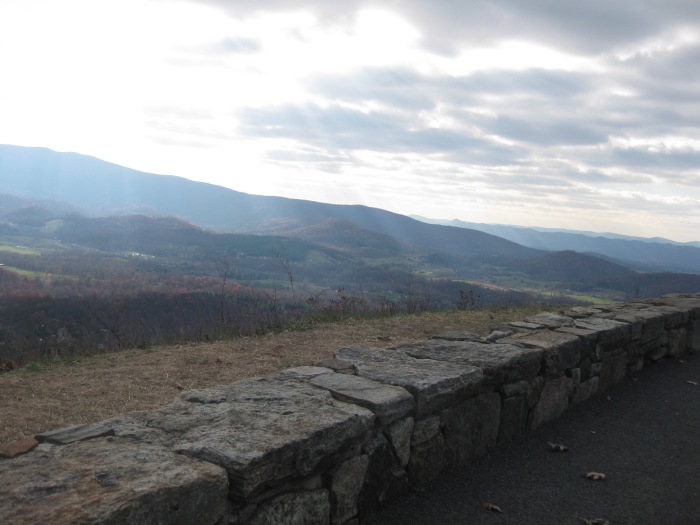 We even got to hike a little on the Appalachian Trail!  🙂  It makes me so excited every time I get a little glimpse of the trail as this is another goal I have dreamed of for YEARS! 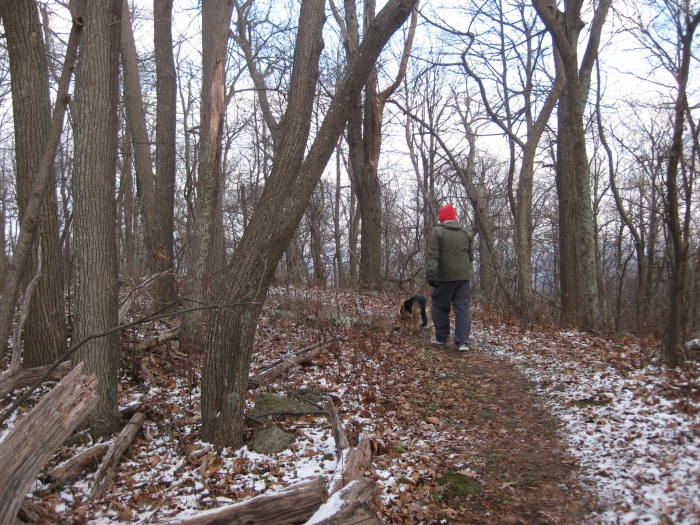 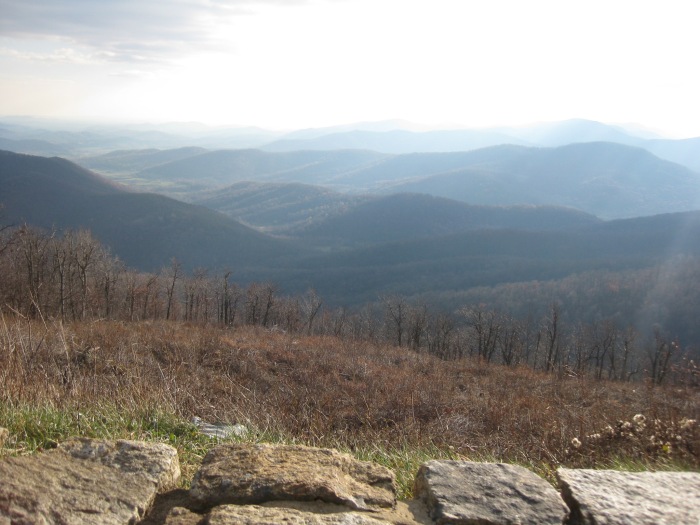 It started getting dark so we decided that 1/2 of skyline drive would have to do- there was no point in driving down a scenic road in the dark anyway.  We drove over to a hotel that was close to Spruce Knob as that would be the 1st highpoint of the day and we had to start early to get all 3!

The next day we headed out on some crazy curvy roads – I have to say the road up to Spruce Knob was a little sketchy- the closer we got to the top, the icier it got.  We even saw a van that was stuck – I have no idea how they were going to turn around as the road was pretty narrow.  We took our time getting to the top and there were only a few other cars in the parking lot.  Once we got all our stuff together we set out down the short trail to the highpoint.

It was so serene – snow was falling a little and the path was covered in snow.  Looking at the windswept trees where 1 side was covered in snow and the other side it had melted or blown off was my favorite part!  The fact that something so simple can be so beautiful is mind boggling!  The snow covered path was very easy to walk down and not far to get to the observation tower. 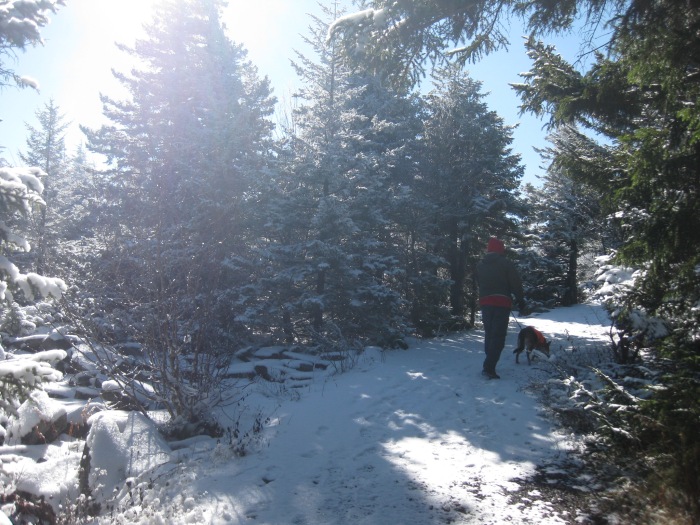 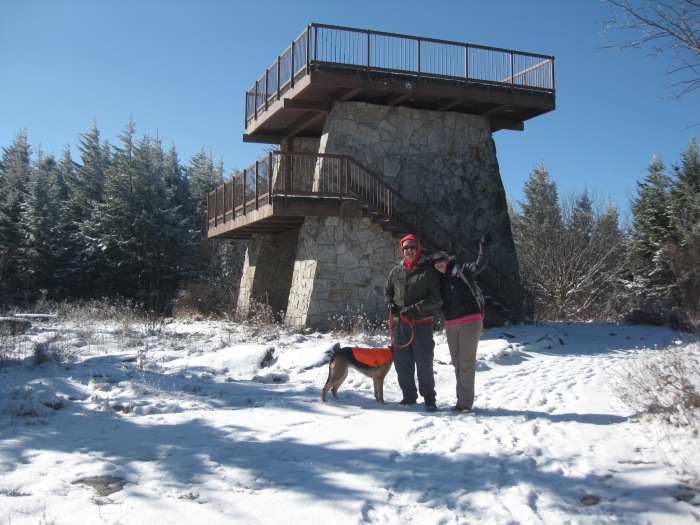 Once we reached the tower we set up my tripod to take a few pics – I was glad I brought that heavy bulky thing so we could get some pictures all together.  My dad and Jo climbed to the top of the tower and I said “Do you think I can set the timer and run all the way to the top so we can get a picture together?”  My dad said no, but too late- the challenge was on!  I set the timer for the longest time possible and set it to take as many pictures as it would allow, lined up the shot, pressed the button to start, and took off running towards the steps.  I made it to the top with a few shots to spare- HA! Take that! 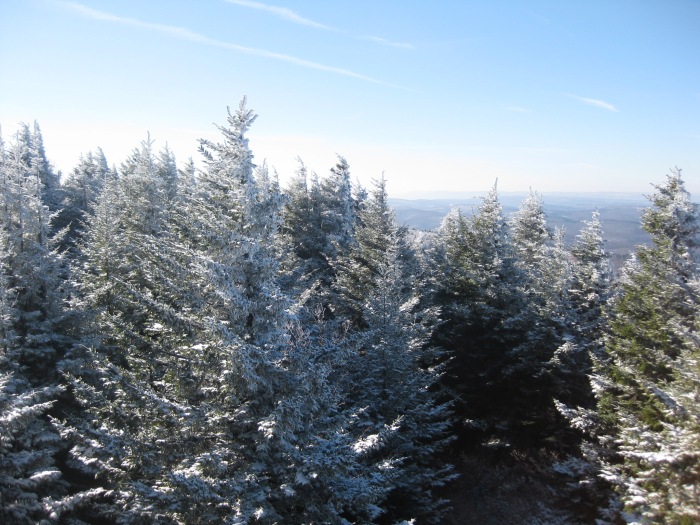 Once at the top we took some more pictures- I couldn’t believe how far you could see!

We decided to hike on the trail that continues past the tower for a bit. 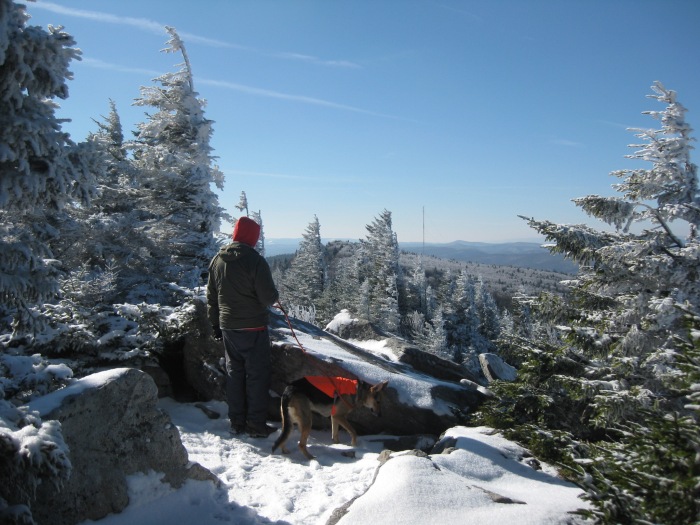 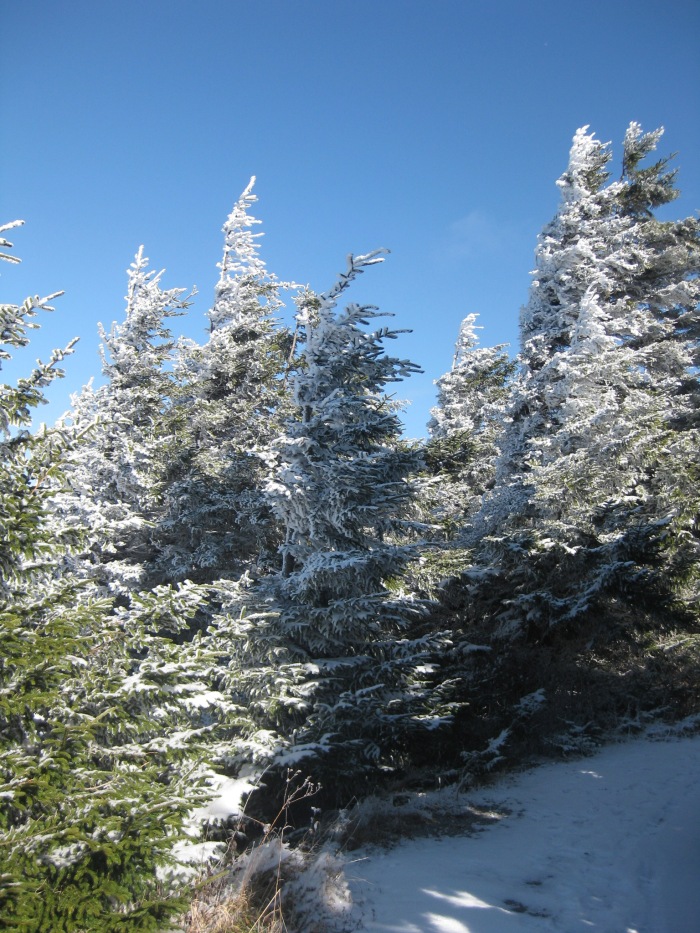 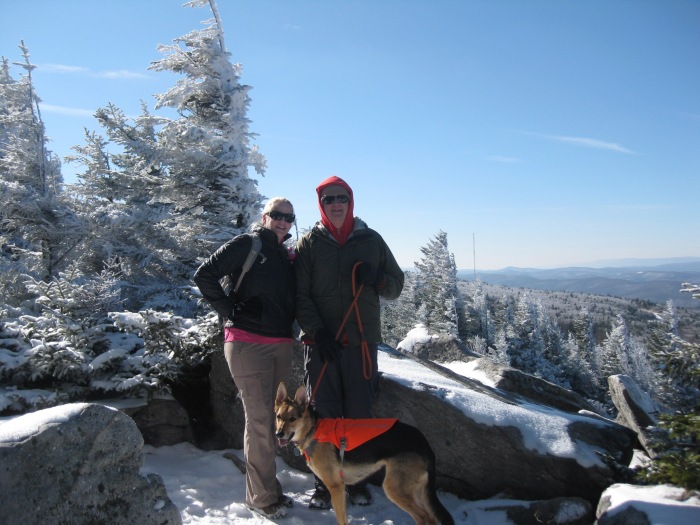 Once we were done looking at the views we headed back to the car- we had A LOT of driving to do today after all!  I never did find the USGS marker for WV but I wasn’t 100% sure where to look either- I kicked the snow around a bit but no luck- oh well!  I wouldn’t mind going back!  🙂

The drive down made me even more nervous- the brakes of my car started to smell like they were burning and passing cars that were on their way up was horrible.  The drop off was very steep on my side of the road on the way down and it seemed like people wouldn’t get over far enough to let me pass- add the spots of ice we would hit now and then and it was probably the worst drive ever.  I was so happy to be off that road.

Next stop was Backbone Mountain in Maryland!  I knew the trail actually started in WV and you had to hike INTO MD as there was private property surrounding the land on the MD side.  We were driving for a while and I saw signs for the smallest church in the lower 48 states- we had gone too far and somehow passed the parking for the trailhead.

We drove around for a bit and saw a sign that said it was the highest point on the ROAD of MD- not quite what we were looking for- there was a tiny pizza shop there so we went in and asked- the guy said we had to backtrack quite a bit to get to the trail head.  This threw our schedule off a lot.  So we started driving back.  We almost missed it again when I saw a glimpse of a small sign that said about the highpoint.  We drove til we could turn around and parked on the side of the road at a small pull off.  I would have thought it would be better marked, but I guess really only highpointers care about this spot.

We started down the trail that was fairly easy, but progressively got steeper- it was also snow covered and a bit icy at spots.  My dad decided to turn around about 1/2 way there as he wanted me to make it to the top quick so we could go to the PA highpoint too.  I told him I didn’t care, but he said it was getting a bit too steep for him so he turned around and Jo and I went ahead. 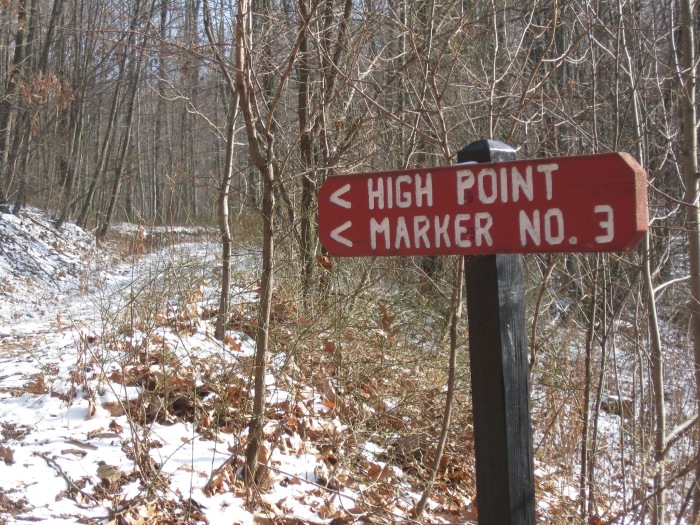 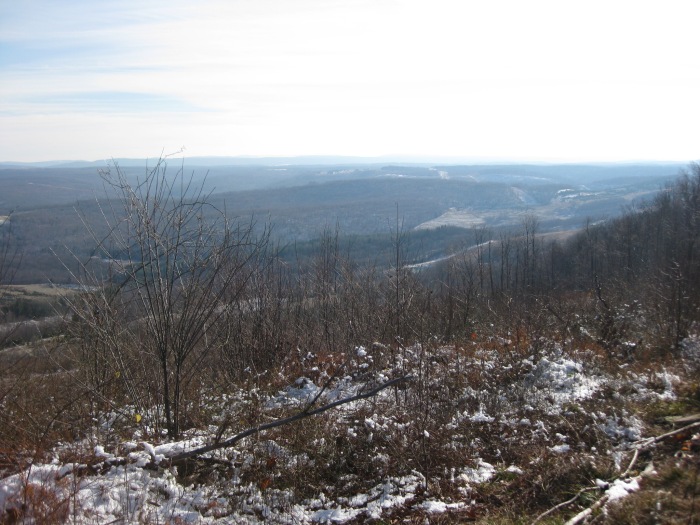 At the top there was a very nice view and a little mailbox with a certificate of completion in it- how cute! 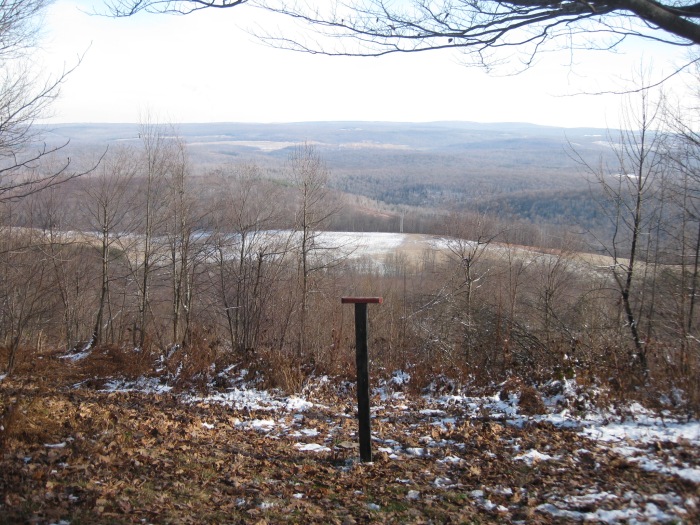 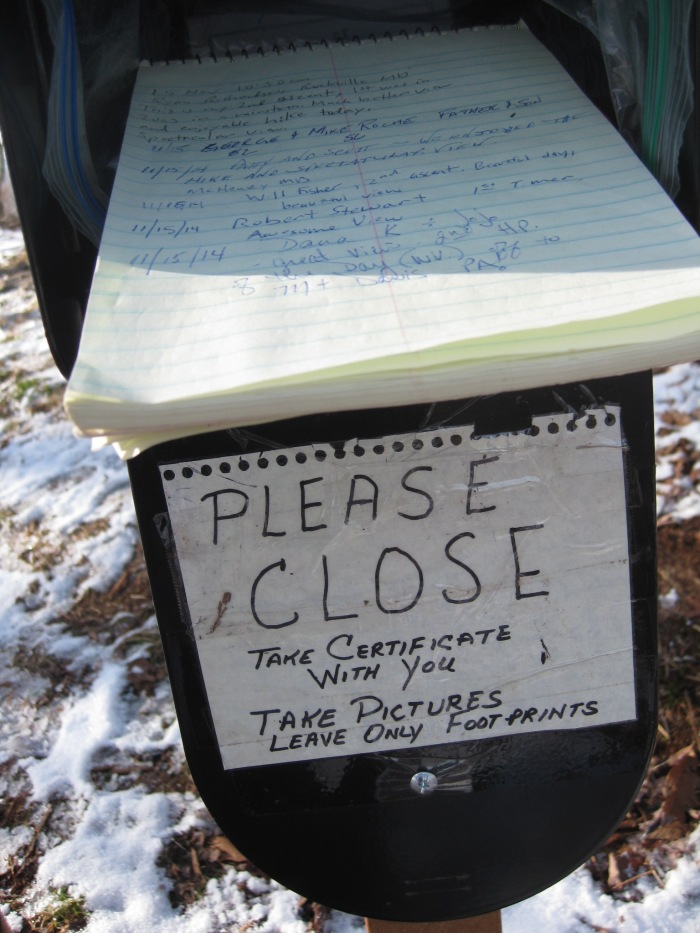 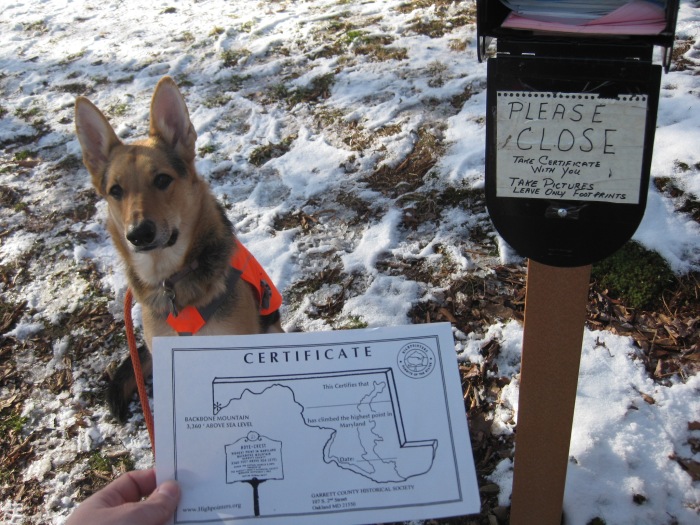 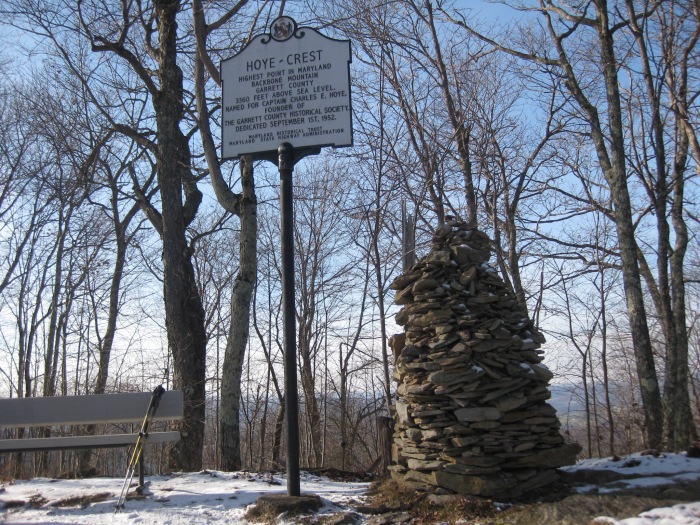 Jo and I snapped a few pics and then went back down the trail to the car- it was a bit harder going down due to the slippery ice and leaves.  Once we were at the car a lady pulled over and asked if I was missing a dog- I said no.  She told me there was a german shepherd running lose on the road and she thought maybe it was mine as she saw me hiking w/ Jo- who is a german shep.  I would have LOVED to go snatch up another dog, but it wasn’t mine- I just hope it found it’s owners!

We set off on the way to Mt Davis, the PA state highpoint.  After we were driving for a while we thought it seemed like we were going AWAY from where we should be headed- we pulled over and looked at the maps and GPS and for some reason my GPS was taking us to a place not even close to Mt Davis- we were so confused!  I must have gotten the directions mixed up I got online.  It was getting late and we were like 1 1/2 hrs away from where we wanted to be- and that was IF we could find it right away.  If we headed towards it we would most likely be hiking in the dark.  We decided that it was pointless and we would have to go back and get Mt Davis another day.  I was slightly disappointed, but it was such a great weekend overall that I didn’t mind that much- just means I get to go on another road trip!  🙂