When our vacation to South Dakota was approaching we would have one of the following conversations with people:

“What are you doing for vacation?”

“Where are you going for vacation?”

“What is out there?” in a totally confused tone of voice

“OH! I never knew that’s where that was!”

Honestly I probably wouldn’t have known where it was either and have never really had any interest in seeing it, but when I was planning where I wanted to go for 2015 with Kevin I was spouting out all these other places and Kevin says, “Can I ever pick where we go?” I was totally shocked and said, “Well where would you want to go?” He said “I don’t know- maybe out to see Mount Rushmore”  I wasn’t very excited at first- what else would be out there to see?  Then I realized it was very close to Harney Peak which is the highest point in South Dakota.  SOLD!  So we looked into planning a 4 day trip to see the sights!

My sister Claire and her husband Zach came along also.  We planned a full 4 days of sight seeing, saving Harney Peak for Saturday as that would be our last full day there and we weren’t sure how hard it was going to be or how long it would take us.

We arrived Thursday afternoon- to rain and fog.  Once we got the rental car we drove over to Mount Rushmore – which we couldn’t really see due to clouds covering their faces.  It started raining really hard so we went back to the car- at least when you pay to park the pass lasts for 7 days so we could try again another day if the weather cleared up.

The rain really started coming down so we just drove around for a while when we saw a sign for Rushmore Caves- we drove down the road to take a look.  When we went in the visitors center they told us they were just about to start a tour so we bought tickets and joined the small group.  The tour was about an hour long and was pretty cool!  It was nice to be out of the rain as well!  I would recommend this tour if you are in the area- just know that it is a tight squeeze in some places. 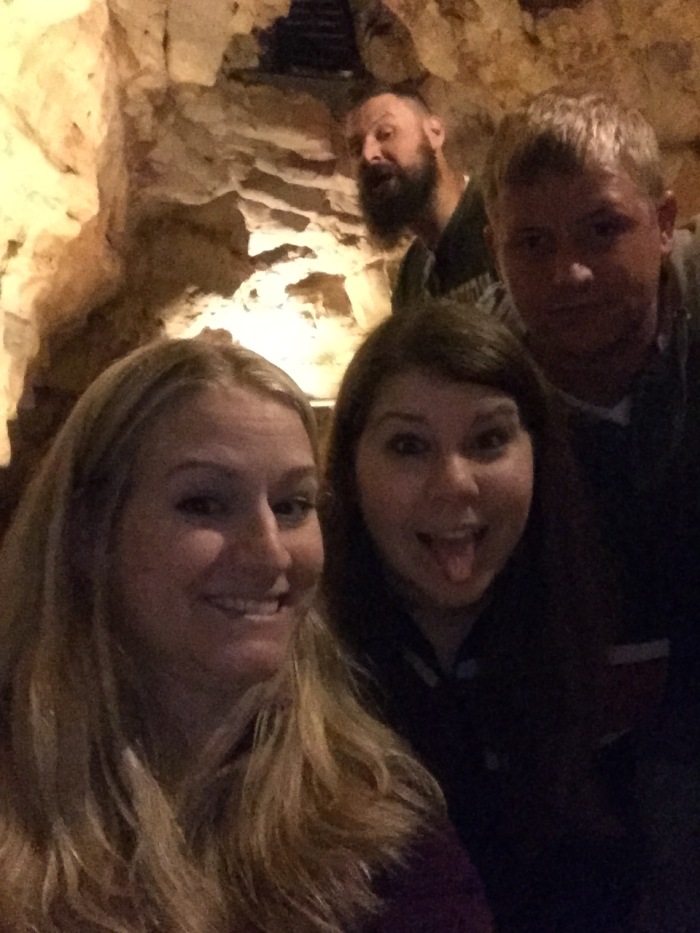 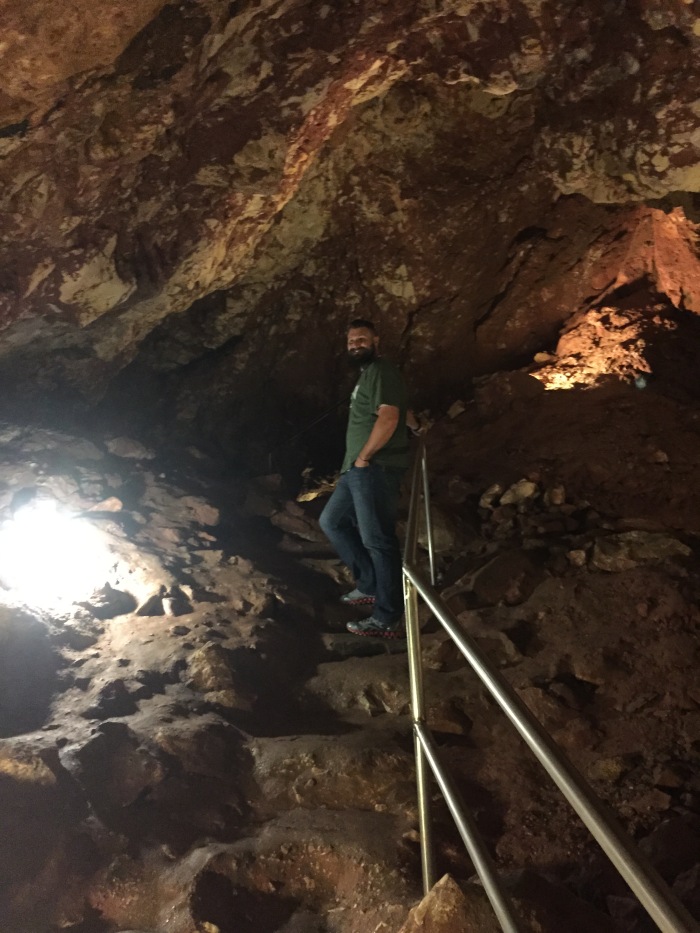 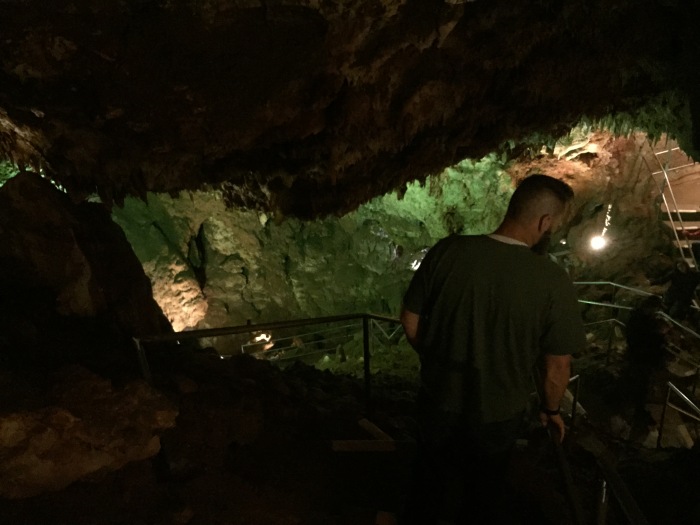 When the tour was over we drove to the Crazy Horse monument.  The visitors center was HUGE and had tons of information and artifacts from the Native American people and a short video about the construction of the memorial. 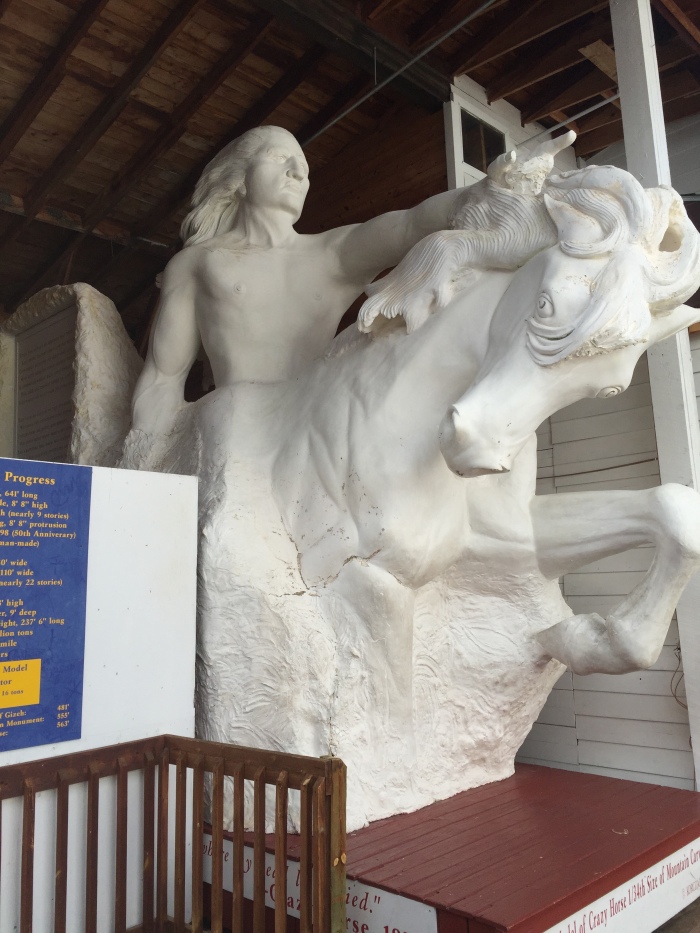 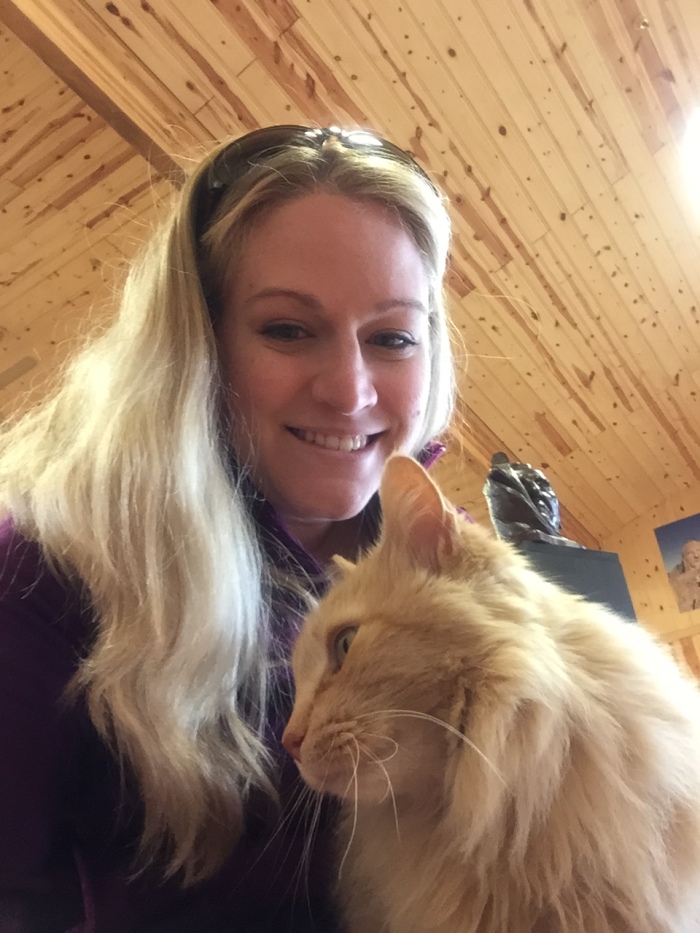 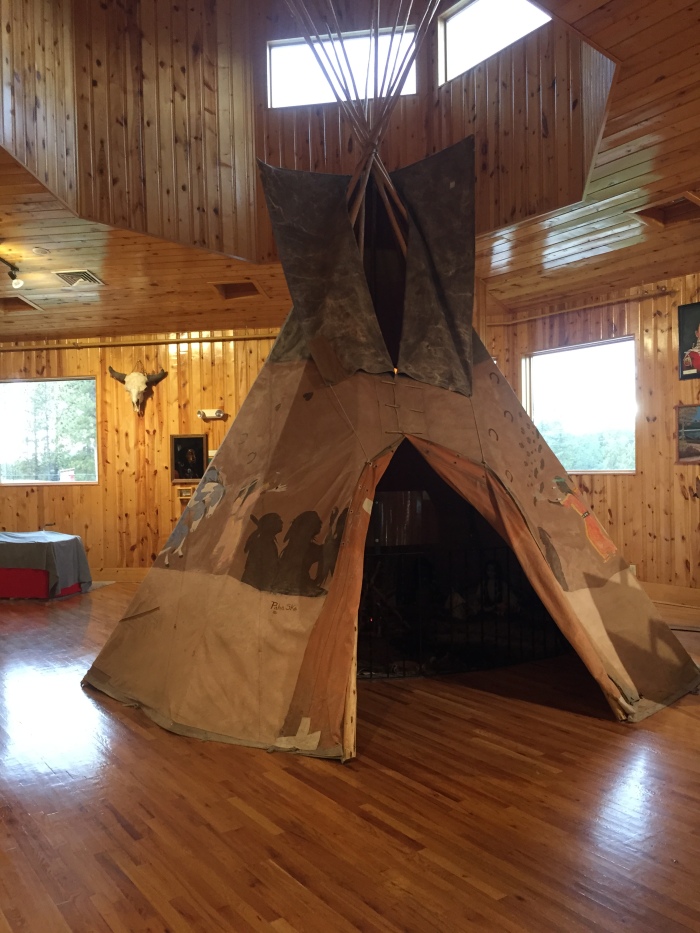 It had stopped raining but it was still a little cloudy.  We took our time looking around and then went to check into our hotel- we were staying at the Baymont Inn & Suites.  It was a nice place and I would stay there again if we would ever go back to South Dakota.

Friday we headed over to the Badlands- again it was raining and super foggy so we didn’t have the incredible views you see in pictures, but it was still pretty cool.  At the entrance we saw a goat or two high up on the rocks so we stopped to get a few pictures. 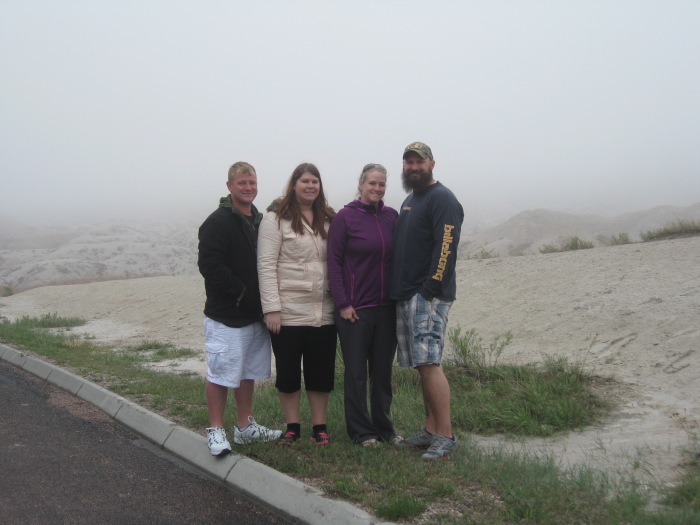 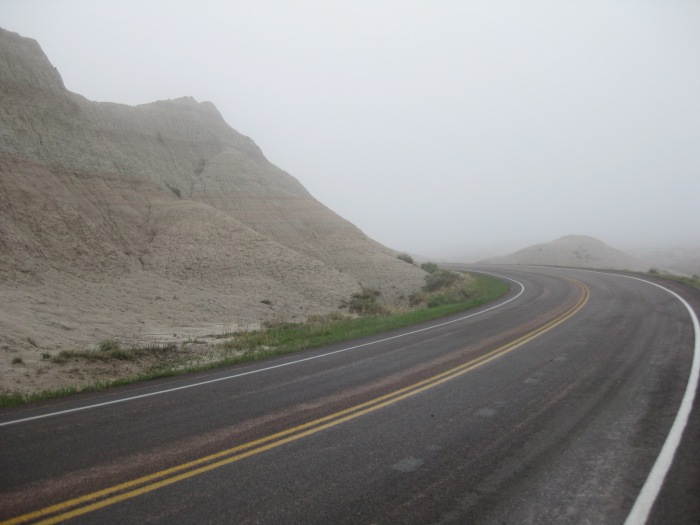 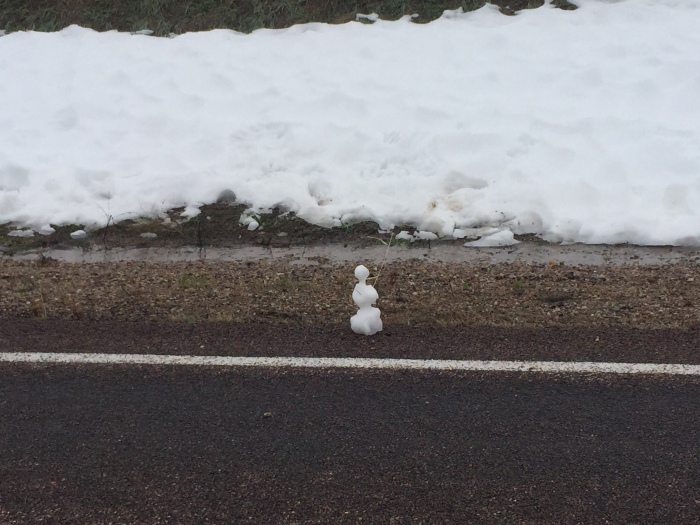 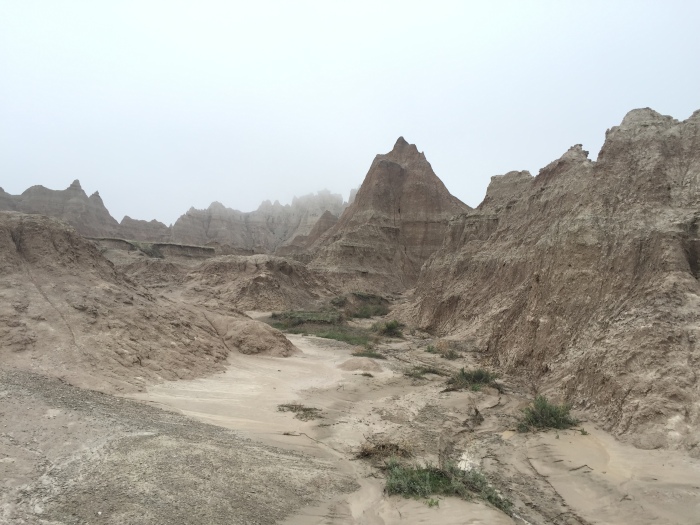 We took our time driving the loop, taking pictures at various pull offs along the way.  We also hiked a few of the shorter trails along the drive – it was a little rainy and cold, but still pretty.  There was a visitors center along the road and the Cedar Pass Lodge that had a cute gift shop and a restaurant – they had this really good Sioux taco- I got the vegetarian option that had beans, cheese, lettuce on some kind of homemade fluffy tortilla thing!  It was really good!!

After we finished the loop, we decided to go back and drive it in reverse as the weather seemed to be clearing up a bit.  The closer we got to the start, the foggier it got again.  Once we got back to the start we saw even more goats- they were on both sides of the road- and even a little baby- so of course we had to jump out and get more pictures!

After that we decided to drive over to Wall Drug- which is basically just a giant tourist trap.  I do not recommend going there unless you are in the area anyway.  It was basically like a ton of random stores all under one roof.  While we were walking around I started to feel sick- I ended up having to run to the bathroom.  I am not sure if I was ever that sick in my life- I think it was food poisoning.  The others wandered around while I just kept getting sick.  The only good thing about being there was that since there was so many random stores I found one that had Pepto.  The others got some ice cream and asked if I wanted any- was that a joke?  Haha- not funny.

We made it back to the hotel and I was extremely sick for the first part of the night.  I woke up around 2am to get up to go to the bathroom and I felt like the room was spinning- I had to hold onto the wall to steady myself.  This was getting crazy- I was getting sick and the room was spinning at top speed- do you have any idea how NOT fun that is?  It was HORRIBLE!  I tried to lay back down, but if I would lift my head up I would just flop over.  Kevin started to get worried and asked if I wanted to go to the hospital.  I did NOT want to spend my last day in South Dakota in the hospital.  Kevin told me I was probably dehydrated from being so sick so I started chugging water and Gatorade.  By the time it was time to get up for breakfast I wasn’t nearly as dizzy and my stomach started feeling better.  Claire asked if I would be ok to hike to Harney Peak and I said I came all this was I was going to crawl to the top if I had to!

We started off towards Sylvan Lake- when we were almost there we saw signs that said “ROAD CLOSED” – what the heck?  So we had to drive completely out of the way to get to the trailhead at Sylvan Lake- we arrived WAYY later than I had hoped.  I knew this was going to be an all day hike so I wanted to start as early as possible, but we couldn’t do anything about it.  When we pulled into the parking lot for Sylvan Lake I knew the hike was going to be unlike ANYTHING I have ever seen before.  The crystal clear blue water of the lake with various rock formations and giant boulders were absolutely stunning!  Also this was the first nice day we had in South Dakota so far.

We started down trail #9 which is the most popular trail to Harney Peak.  It was a beautiful trail that actually looked like glitter was sprinkled all along it- it was actually the Mica mixed into the other rocks.  At some points there was still snow on the trail as it snowed 14″ the weekend before we arrived- I was glad that most of it melted before we got there. 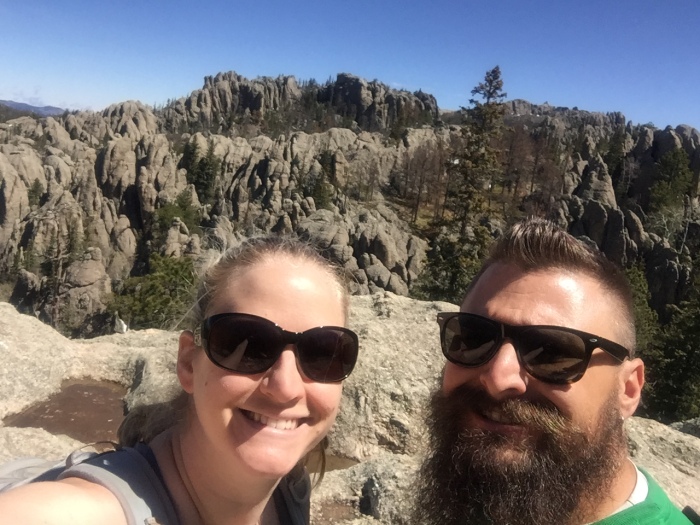 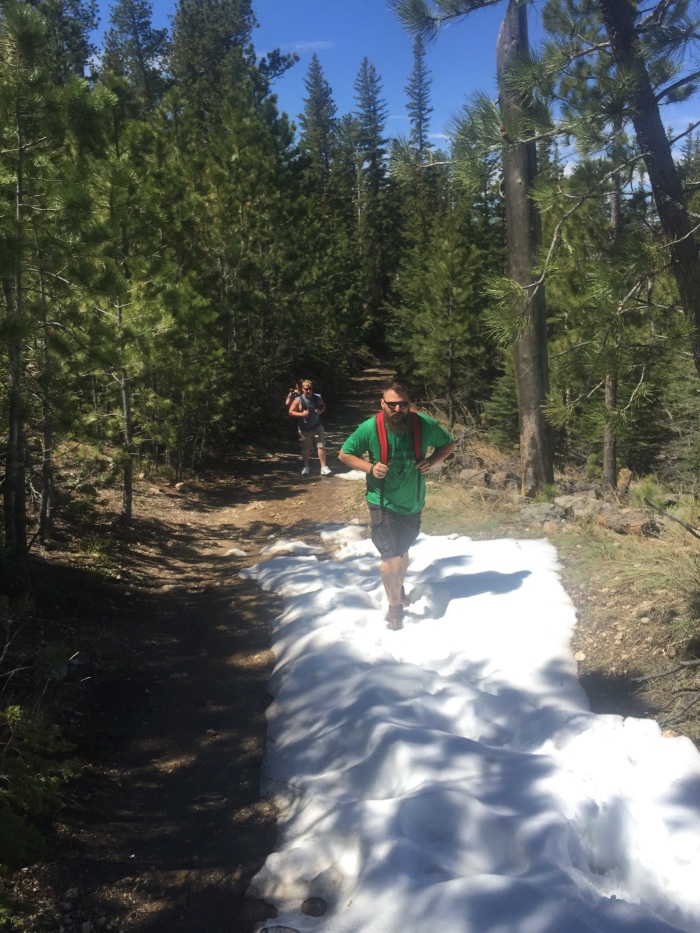 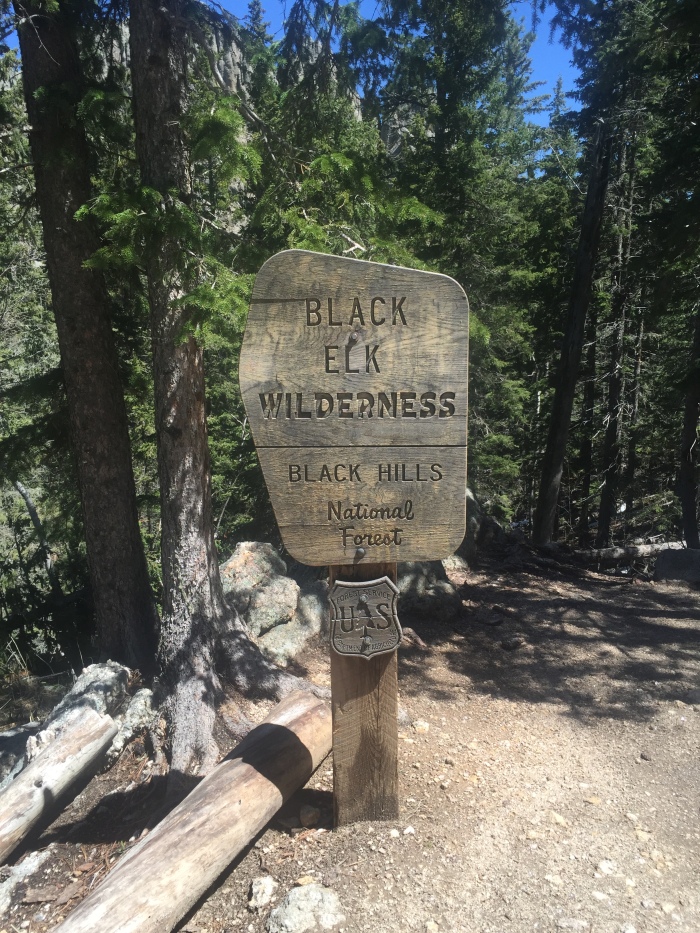 Once we got to higher elevation we saw all the damage to the trees from the Pine Beetles- they are apparently very invasive and destructive.  There were signs with info about what they are doing to combat these critters.  It was still an extremely beautiful area despite the dead trees. 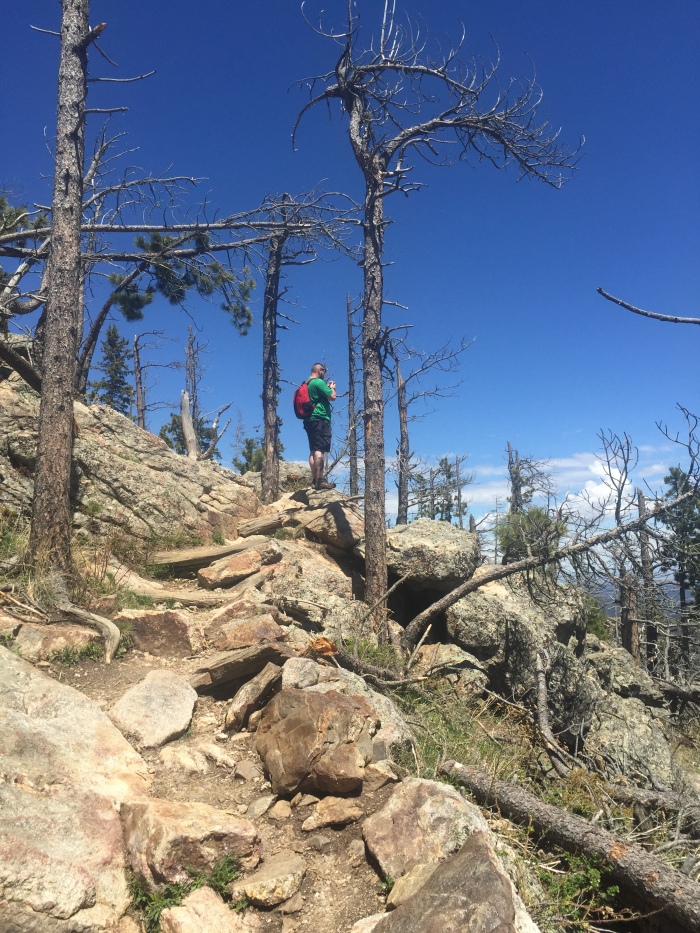 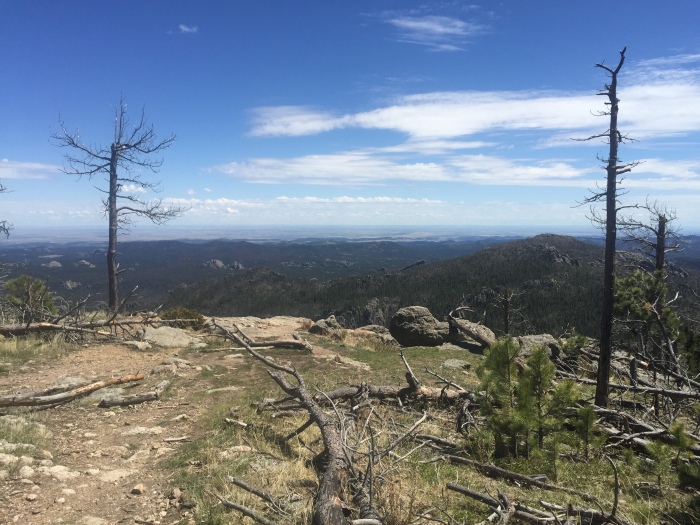 Right before we got to the fire tower, we had to go up about a MILLION steps- that did not feel good on my already aching legs from the hike- but it was totally worth it once we saw the view!  The fire tower was awesome and had a few different levels that you could explore.  I saw a bunch of people on a mound of rocks a bit away from the fire tower and figured that was probably where the ACTUAL highpoint was.  Kevin hiked over to see if he could find the USGS marker.  He motioned to me that he found it and took a few pictures.  I started to hike over- I had to get there too for it to be official! 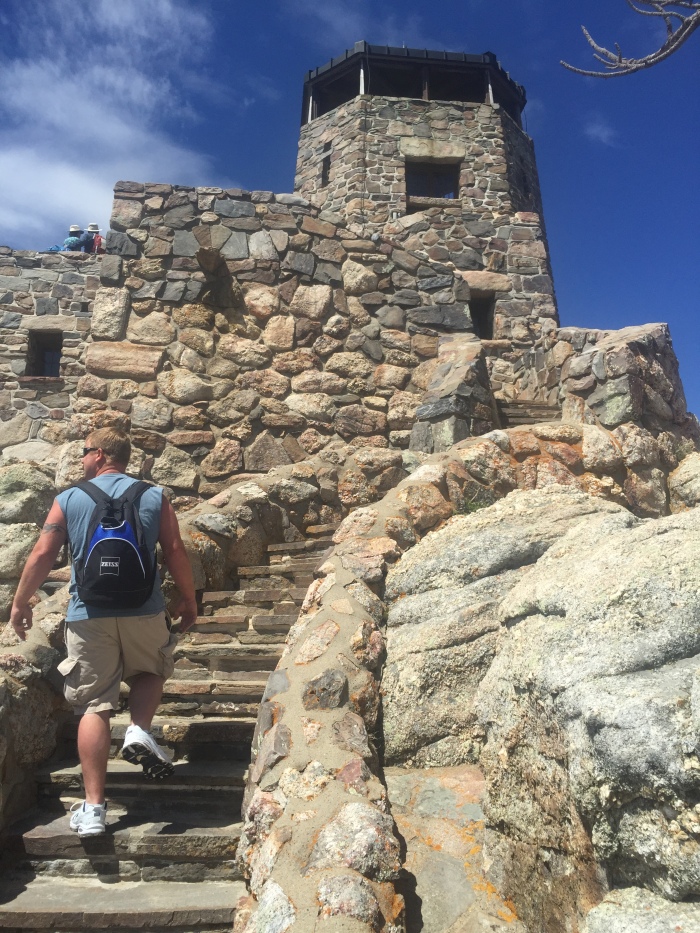 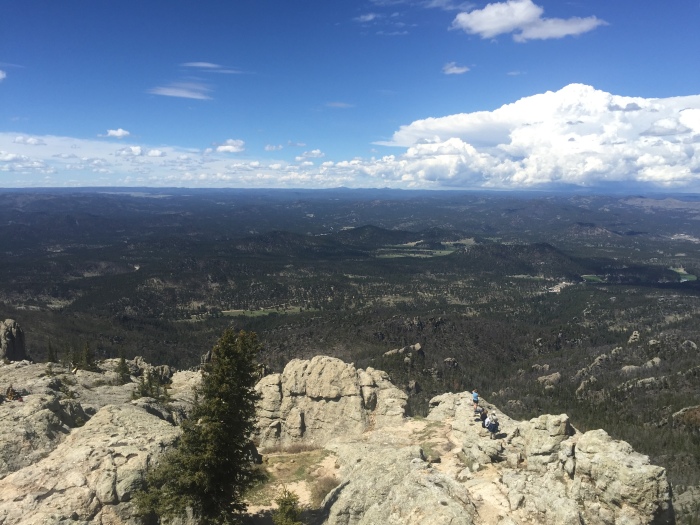 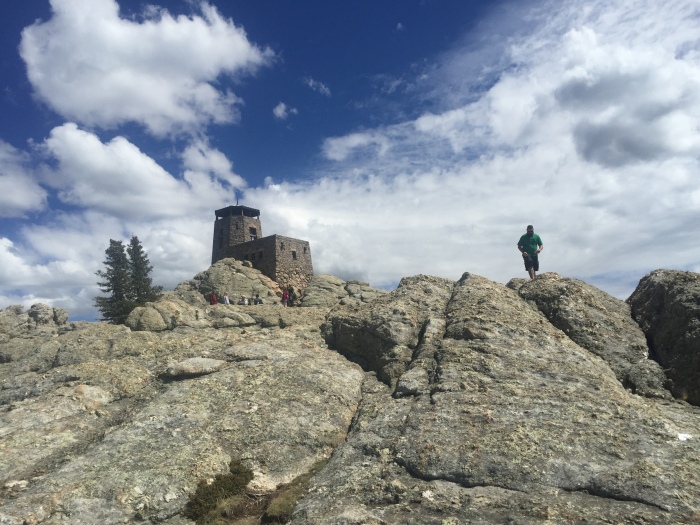 It was just amazing to be standing on the highpoint of South Dakota- somehow I managed to be the only one at the USGS marker- I didn’t want to leave, but after a few pictures we started to hike back down.  There was a few grey clouds rolling in and we didn’t want to be on the trail if it started to rain. 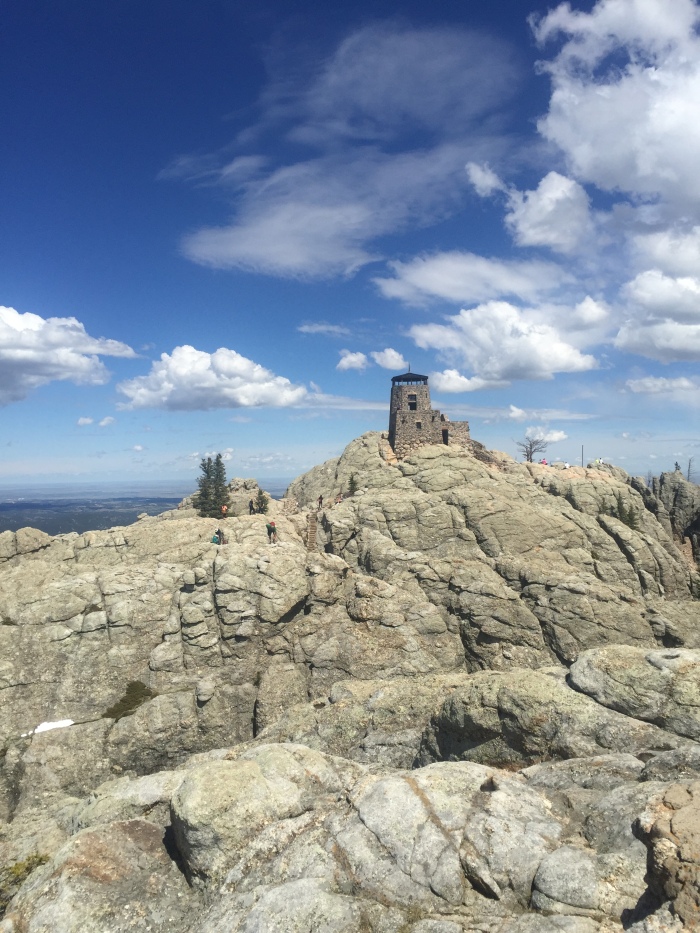 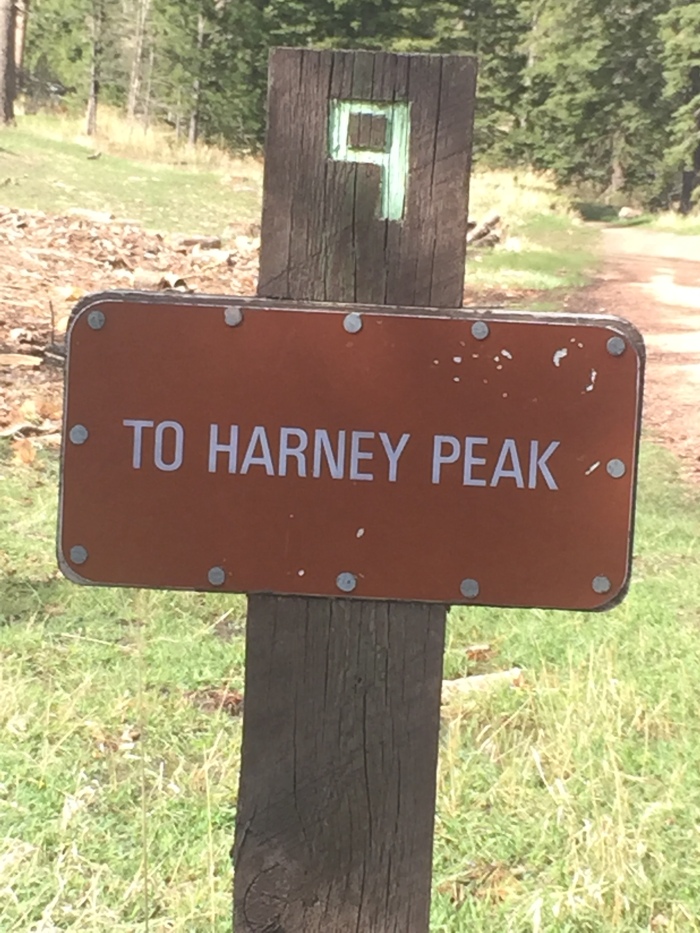 Once we made it back to the car, we decided to drive the Needles Highway and the Wildlife loop- both were amazing!

Buffalo crossed right in front of our car- it was a little nerve-wracking when 2 buffalo started fighting right outside of my window.  The Prairie Dogs were adorable, but it was very hard to get a good picture of them. 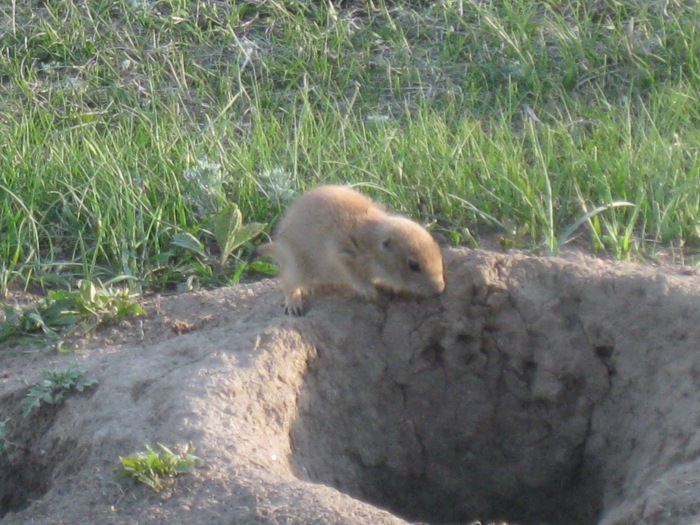 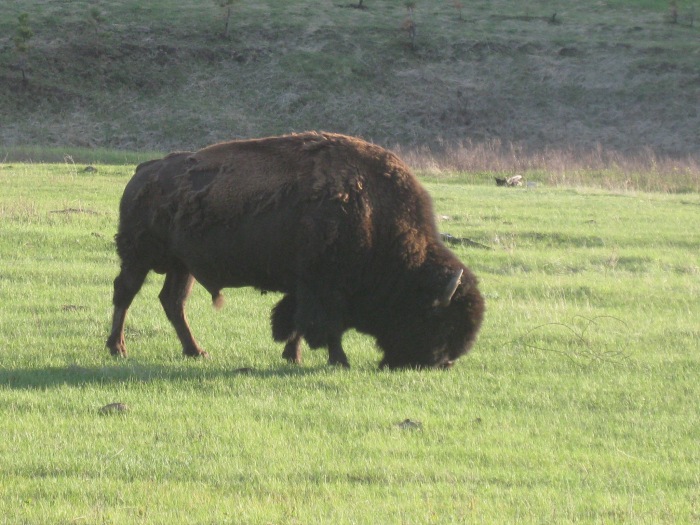 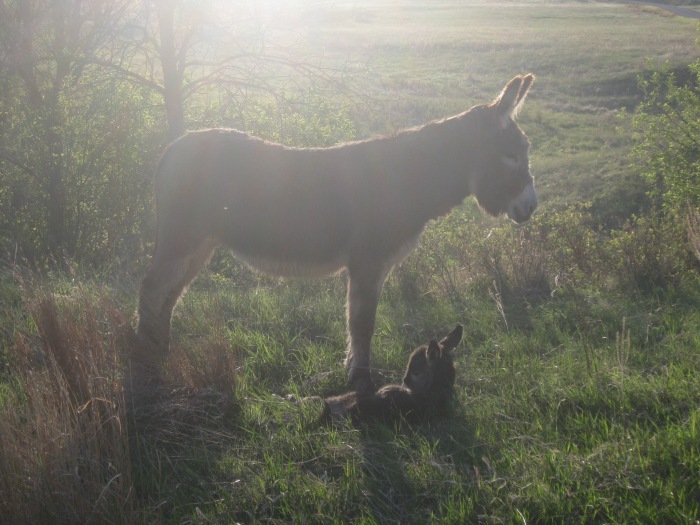 We were absolutely exhausted when we made it back to the hotel- there was a pizza shop right in the lobby and we were told that they would deliver to your room so I called down:

I said “OH! Isn’t this the pizza place in the lobby of the Baymont?”

They put me on hold for a really long time- I was sooo confused- how do you not know where you work??  So Kevin said to just hang up and we would walk over to it.  Just an FYI, the pizza is delicious and I DID call the correct number.  Haha.

After a good nights sleep we got up early to drive over to Mount Rushmore before our plane ride back home.  The sun was shining, but it was extremely windy.

I was worried that the plane wouldn’t be able to take off due to the wind, but little did I know Chicago, which was where we caught our connecting flight, was even windier.  It did not help my fear of flying at all.  But we made it home in one piece and I will live to hike another day!  🙂