I have been wanting to bike the 22 mile Cape Cod Rail Trail in Massachusetts since I saw it earlier this year in an article about the best rail trails by the beach (or something like that).  I was hooked – I wanted to bikepack to Nickerson State Park or some other campground along the trail, but was unable to get a campsite.  My parents decided they wanted to come along too so my bikepacking trip turned into just a long bike ride – which was fun!

The GPS said it would be a 6 hour drive, but with traffic it turned into about an 8 1/2 hour drive.  We checked into the hotel near the start of the trail in Dennis and were lucky to get a room on the 1st floor so we could keep our bikes in the room (no elevator).  I honestly have no idea what we did after we checked in – I think I just went to bed and my parents went and got ice cream and walked around a bit.  Why does a long car ride make you so tired??

In the morning we got up and headed out to the car to load the bikes up.  We chatted with a lady who wished us luck on the bike trip and asked how long we thought it would take to which we could only reply “It depends on how many pictures we take!”  🙂 My dad drove my mom and I to the trailhead in Dennis – after some confusing GPS directions “Turn East onto West Dennis Road” with a sign that said “North South Dennis Dennis”  ok so the sign is really 134 North towards the town of South Dennis, but we were cracking up anyway.  When we got to the parking lot we unloaded our bikes and took some pre ride pictures and then headed off down the trail. 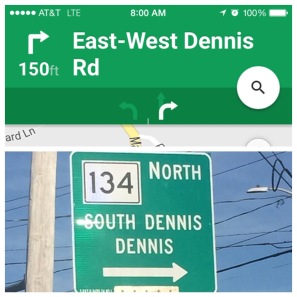 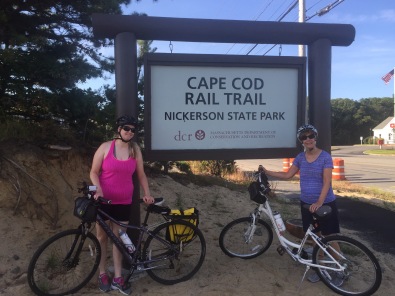 I was not surprised how busy the trail was because it was such a beautiful day, but I was surprised at the speed a lot of the cyclists were going.  The entire trail is paved, which makes it ideal to cycle on, but it seemed like a race track at times.  There were a lot of road crossings also with signs saying to get off and walk across the street, but it seemed like my mom and I were the only ones doing this and the cars were stopping to let us go either way.

We ate breakfast at one of the many restaurants along the trail and if you want ice cream – man does this trail have a TON of places to stop – we got off the trail a bit and went down the street to Ben & Jerry’s so I could get some dairy free ice cream – YUM! 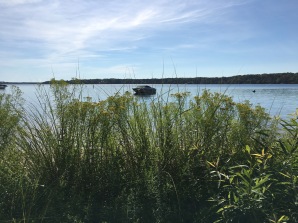 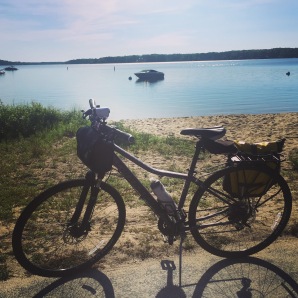 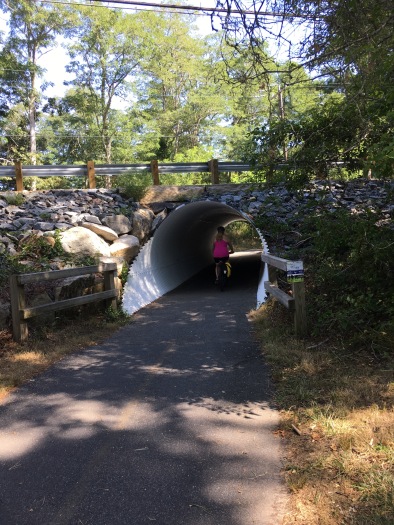 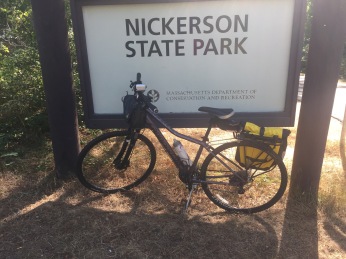 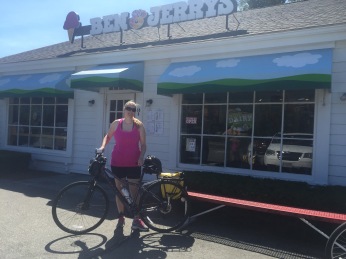 Shortly after that we cycled to Marconi Beach – it was about 1.5 miles off the trail.  Cyclists get in for free so keep that in mind if you’re heading that way.  The ride to the beach was easy – slightly downhill, but coming back up wasn’t bad!  The beach was beautiful and I was surprised that you had to walk down a bunch of steps as the beach was below a cliff.

Once back on the trail we only had 2 more miles to go until the end where my dad picked us up. 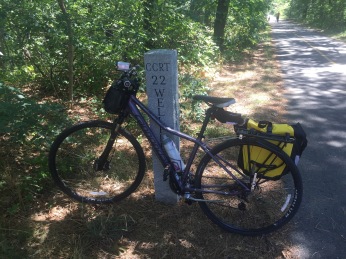 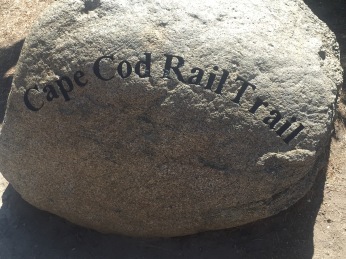 Cape Cod Rail Trail COMPLETE!  Our whole bike trip ended up being a little over 26 miles because of the few times we got off the trail.  We drove around to other parts of Cape Cod to sightsee and then went back to Marconi Station and got to see seals splashing in the waves – that HAD to be the highlight of the trip for sure!  I just wish I could have gotten closer as we were again up on a cliff with no way to get down.  Not the greatest video in the world, but you can see them peaking their heads out of the water – I was zoomed in with my phone as much as I could.

I love this pic of my bike in the rearview mirror as we were driving home early the next day!