After I flew into Las Vegas my BFF Jen picked me up from the airport and we drove to Flagstaff, AZ to spend a few days of sightseeing.  On the list of planned activities was hiking Humphreys Peak.  We were up before the sun and headed out to the trailhead which was only about a 15 min drive from Flagstaff.  The sun was just coming up as we started down the trail at 6am – I was seriously wishing I had some gloves as it was a little chilly, but I knew it would warm up as the day went on.

The trail starts off through a meadow at the base of the mountain at the Arizona Snow Bowl.  There were a bunch of wildflowers in bloom and it was an easy hike to the edge of the forest.  Then the switchbacks begin.  The trail meanders through the woods on it’s way up the side of the mountain. 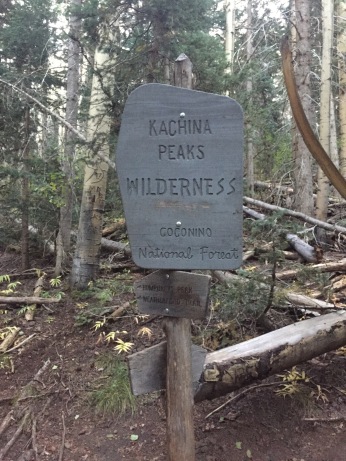 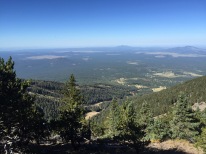 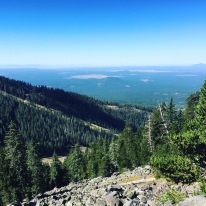 There is a trail register to sign along the way, but it’s not at the start of the trail – it’s maybe 1/2 mile in which was strange.  The trail had a fair amount of rocks and tree roots along the way, but the path is easy to find as it is well worn.  You cross over 2 boulder fields which was pretty awesome.

At one point I kept hearing “WHOOM – WHOOM” like a mini-airplane right by my head.  I asked Jen if she heard it and she didn’t.  It sort of freaked me out because I had no idea what could cause a noise like that and so close to my head.  She told me to keep walking, but I was determined to figure out what it was.  We looked into the trees and Jen spotted a tiny hummingbird zipping about.  WHOOM – it flew right by my head again – that was definitely what was making the noise – maybe it was checking out my bright colored shirt?  I tried to take a video, but it was too small to show up very well.

I’d say at probably around 10,000′ I started to experience signs of altitude sickness.  I was getting dizzy and got a headache which got worse the farther up I went.  I was walking slower and started coughing.  We made a plan at the beginning of the trail that if we hiked for 4 hrs and still didn’t reach the summit we would turn around.  The hike is listed as 4.9 miles 1 way, but my GPS reached 5 miles and it said we were still .9 miles away from the summit.  (I read later that the mileage may not be correct on this trail as it was measured with one of those measuring wheels?  Not sure about that but the mileage definitely seemed to be off).  At this point we had been hiking for 3 1/2 hours.  I knew it would take another hour at least to finish the trail and we still had to get back down.  We were almost at the edge of the tree line where the trees were starting to thin out at about 11,650′ according to my GPS.  I sat down to rest and Jen suggested we keep going because it may get worse if I keep sitting down to rest.  I said; “Yeah but when I sit I’m at a lower elevation than when I stand”  🙂  She said; “I knew as soon as you opened your mouth you were gonna give me a sarcastic answer!” LOL!

I decided to call it quits shortly after that – I was too dizzy to continue and wanted to descend to relieve my headache.  I also didn’t want to be anywhere near tree line from about noon on as we read/ were warned by locals about the boy who was recently struck by lightning on that part of the trail.  I was surprised at the amount of people on their way up in the afternoon that we saw on our way down, including one adorable 75 year old gentleman who said he just wanted to see how far he could go.  I couldn’t help worrying about all of the hikers, but the forecast was supposed to be clear so they were ok.

We still had some awesome views along the way and the trail was really fun to hike so I am not upset I will have to go back to finish this highpoint.  Next time I will take it a little slower and rest more.  The dizziness went away at about the same point it started on the trail, but my headache lingered for about 24 hours. 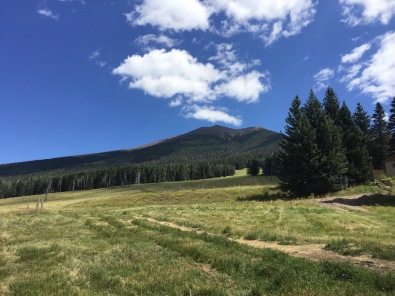 I read many blogs about hiking to Humphrey’s Peak – I wasn’t sure what to expect because everyone experiences elevation sickness differently.  Some people made it to the top no problems and some started vomiting at a lower elevation than I was.  It’s crazy – and I’m really happy I didn’t get nauseous.  This was the highest state high point I have attempted so far and I am really happy I made it as far as I did.

Anyone else ever experience altitude sickness?  Any tips you wanna share on how to overcome it?  🙂