What am I doing with my trekking poles in this picture?  Ohh just weighing them to see how much it would be to FedEx them back to home…. 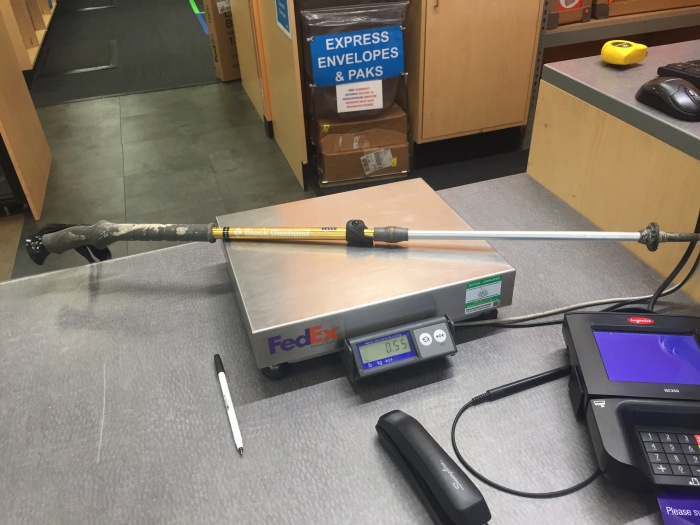 I typically always use trekking poles hike because I am super clumsy.  I remember hiking with my dad a while ago – I was using them, he was not.  He kept making fun of me and then about 5 minutes down the trail as he was stumbling along (we have the exact same level of balance – zero) he said “Give me one of those dumb things!” and has used trekking poles ever since – haha!  Mine are really old, but still work great and are sturdy so why get a new pair (you can see they are still covered in mud from North Dakota).  I was planning on bringing them with me to Arizona, but never had to collapse them before.  They have the flick lock on the top and then there are these weird buttons on the bottom.  I don’t even think they make poles with those buttons anymore – here’s probably why:

I COULD NOT COLLAPSE THAT PART OF THE TREKKING POLE – no matter how hard I tried!!   I kept pushing the buttons and then the pole would just spin around and around.  There was no way it would fit in the suitcase I had while they were only 1/2 collapsed.  After Kevin and I fought with them for a while he finally got them to collapse as small as possible.  They finally fit into my suitcase, but I was worried that I would have a hard time fitting them back in for the plane ride home.

Fast forward to the last 2 days of my trip, Jen and I spent wayyyy to much time trying to get that button to work.  We were able to get it working on one pole, but the other was just impossible!  The tips of my fingers started to hurt after a while, but nothing we did worked.  Jen suggested I mail it back home so we took it to a FedEx in Las Vegas.  The guy at the counter weighed it, measured it and then had to go in the back to get a special size box.  He then gave me my quote after some hesitation – $50 to ship it back home – yeah, no.  I decided I would bring it back to the hotel to keep fighting with it.

Jen suggested maybe I could just carry it on the plane because some people carry on canes, but turns out that is a big no no as well.  We decided she would drive it home with her, see if her husband could get it and then bring it back to PA with her next time she flew there.

As I was waiting for my taxi to the airport I got a video text from her of her husband opening and closing the trekking pole – multiple times in a row.

“You’ve got to be S#!++ing me.”  I believe were the exact words that spewed from my mouth as I watched the video in disbelief.  I texted back the only thing I could think of; “WTF – well we loosened it – obviously”  She said she still couldn’t get it – you have to press the buttons way harder than we could to get it to work.  So this is probably why they have trekking poles with top and bottom flick locks now – which I will have to get for next time I take my trekking poles on a plane.

Anyway the entire trip wasn’t spent fighting with them – we had a great time walking around Vegas, watching the Bellagio fountains, getting vegan Ben & Jerry’s ice cream, and just hanging out people watching.  Here are a few pictures of the famous Las Vegas Strip: 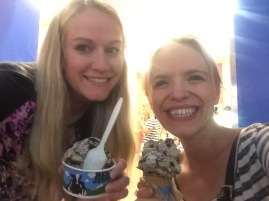 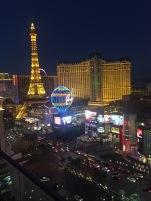 view from our hotel room 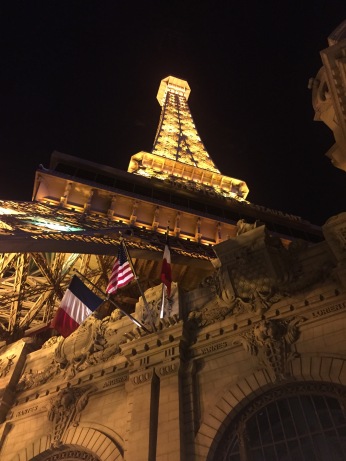 boo – the gardens were closed

Anyone else use trekking poles when they hike?  Why/why not?

12 thoughts on “Trouble With Trekking Poles…”

Great bike ride before the rain
Last errand for the #errandonnee challenge- cycle to my nephews art show! All thumbs up with my other nephew 👍 🚲😊
Fun day for a bike ride to get a snack with my mom and nephew!
Got a few more errands done today for the errandonnee challenge! Cycled for lunch, to pic up pics, and to mail some letters! Can you believe some things still have to be done via snail mail? 🤔🚲 🐌
Cycled to Music Bingo today- the rest of my crew dropped me off down the trail and I raced them there- I lost 🤣🚲 💨
Today’s bike commute to work and to get my hair done! Gotta keep some of it purple to match my bikes! 🤣🤷‍♀️ PS I found more murals!!!
Pretty flowers, TONS of deer, and a smashed up bike rack @sheetz - but that didn’t stop me from getting dinner on my bike commute home! 🤣🤣
Good morning from my bike commute 🌞#errandonnee #errandonne2020
1st bike ride of the year! A little chilly and windy, but fun! 🚲💗
Had a fun walk today for #optoutside day even though the rest of the usual crew that goes w me is sick 😷
found a new mural!! 😍🚲 or maybe it was always there and I just never saw it because there are so many
Today’s bike commute- I get soo excited when I am able to spot them 😊
Oh so pretty!!! Leaves falling all around! Such a great day to bike commute in PA! 😊💗
Dreaming of this place on this rainy PA day
😊 beach+ treats+doggy ice cream = JoJo has the best week ever!! 🐾💗
Assateague is one of my favorite places in the world- I was soo excited to catch this guy hanging out by the sign Friday- he was actually scratching his butt on it but I wasn’t able to get a video of that 🤣🤣
Such a pretty day for a hike!
I just can’t get enough of these murals!