So I have been a little quiet on the blog lately…if you have been reading this blog and/or watching my Youtube channel, you know I have been having problems with my heel/foot for a while and have had to rest it and wear one of those giant boots.  I found out I needed to keep wearing the boot all through April and the 1st week of May which was very disappointing, but it does still hurt, so I understand.  I want it to be fully healed before I start hiking/cycling so I don’t re-injure it and have to start all over. 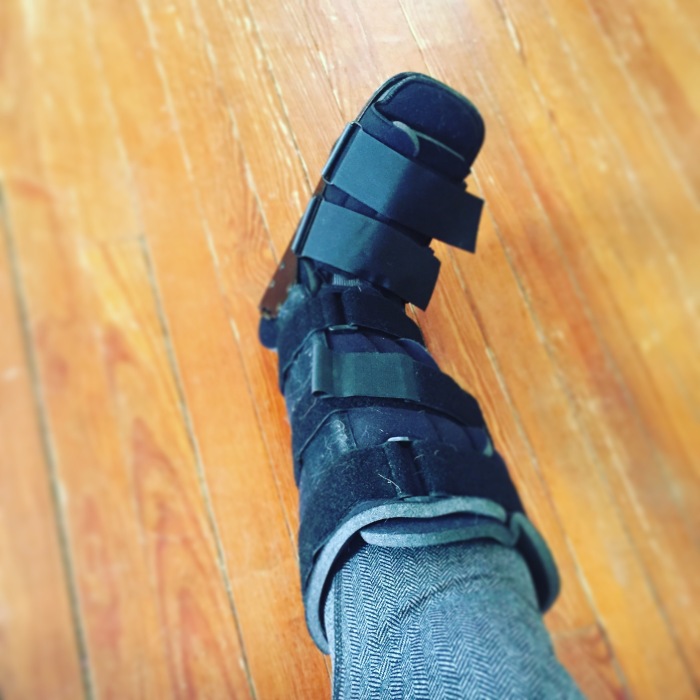 I had to skip all the races I signed up for this spring, but I still went to pick up my packet for the Phillies 5K (we got free shirts and 4 free tickets to a game and I was NOT missing that!).  I went with my friend Amy to the Hershey 10K and we met my sister there.  I was supposed to run with them, but couldn’t so just hung out to cheer them on.  I have to say as I watched them walk towards the start line together leaving me in the parking lot to hold car keys – I got a little teary eyed.  I love the course for the Hershey 10K and it was just upsetting to feel left out this year.  I was even hoping I would get the OK to start cycling so I could contact the race organizers and volunteer to be one of the cycling pacers – that way I could at least do SOMETHING!!  Unfortunately the day before the run my doc said the boot has to stay on 2 weeks full time and then SLOWLY wean myself off it.

After they went to join the crowd and I couldn’t see them anymore I hobbled over to the road where I could try to get a glimpse of them running by near the start.  What a weird feeling being with all the people cheering instead of running.  As the runners started going by, I thought ‘How the HECK am I gonna find them in this crowd of people?!?!’  I could look for the bright greenish/yellow shirt that Amy was wearing but like 50% of the runners had the same color shirt on.  I started to panic a bit – I was gonna miss them and not get a pic of them running by!  Then I saw someone jumping up and down waving frantically and heard people yelling my name – it was them!  I snapped as many pics as I could with my phone and hoped some got ok.  Then I had a laugh because it was almost like they were cheering for ME – LOL.  Wasn’t I supposed to be yelling THEIR names and jumping up and down?!?!  I did manage to yell out a quick “GO GO GO!!!” and then they were swallowed up by the mass of people again.

I figured the next best place to try to spot them was at one of the water stations – I hobbled over and took a spot by the trashcans, thinking there is NO WAY I would miss them there, but somehow we did miss each other.  I stood there from the first few runners all the way through to the last few – watching the cups start to pile up and thinking that would have been a really cool time lapse. I was also trying to avoid the splatter as runners spit out full mouthfuls of water precariously close to my shoes (I did get splashed – gross – hard to jump out of the way when you are confined to a giant supportive boot.)  I have NO IDEA how I didn’t see them, but as the last few people started going through I began to get worried – did something happen???  I sent a text to my sister and asked where they were on the course and they had passed me a while ago – BUMMER.

I decided I probably had about 20 minutes until they crossed the finish line – I didn’t want to miss them again so I headed over.  I was very surprised at the small crowd this year and hardly anyone was cheering for the runners – only when someone they knew ran past would a few people cheer.  I had no way of knowing where they were on the course so I just planted myself in a spot and waited.  I did get a text when they were close to rounding the last turn into the stadium so I could get my phone out and managed a few pics as they ran by.

Then it was over – they got their medals and we headed home.

Dealing with this injury has been frustrating on so many levels – I have wanted to sign up for so many events (runs and bike rides) that sound like fun, but when I mention them to people they say, “Is your foot gonna be ok by then?”  In my head I think, ‘That’s WEEKS away, why wouldn’t I be ok by then?’ and then realize I have been dealing with this injury since the beginning of FEBRUARY now and it is the end of April.

At the last recheck with my doctor I was instructed to wear the boot until May 5th and then I will have yet another recheck.  He told me these kinds of injuries are worse than if I would have just broken it – AWESOME.

I am now allowed to start slowly doing things again.  The doctor said (and I quote):  “If you are used to riding 5 miles, you can try 2.”  That is NOT going to help me bike commute to work.  I feel like I am missing all the great weather!!

I’m not even sure how to end this blog post – it’s been sitting in my draft file for quite sometime, so I think I will just end it here…. So have a good weekend, and I will start posting more when I’m allowed to actually get back to cycling/hiking/ and running – whenever that may be.  Thanks for all the well wishes over the last few months – I swear, this blog will get interesting again at some point! LOL!

2 thoughts on “Hello From The Other Side…”