This past weekend there were 2 5Ks that I really wanted to do – so I signed up for both!  Luckily one was in the morning in Lititz, PA and the other was in the evening in Philly.

Apoca-Lititz (clever name, eh?) started at 9 AM at the Appalachian Brewing Co and is a Halloween themed 5K with a costume contest.  I went dressed like a burglar.  (PS I had to pump gas on the way and felt really weird- like I was preparing my getaway car!)  I got there and noticed NO ONE ELSE WAS IN COSTUME!  I frantically texted my sister and Kevin telling them and saying I was not getting out of the car.  My sister texted back “Well you will definitely be in the running for best costume!” Which made me laugh.  Eventually I saw a few more people in costume so I made my way over to check in.  (You guys don’t understand how many times this has happened to me – where something is a costume contest and then no one else is dressed up!  I was thinking this was some kind of cosmic joke on me – HA!)

The course was really nice – and fairly flat.  I wore my oldest pair of running shoes which was a BIG mistake – my calves were killing me.  I was really happy to see my sister, both nephews and Dad had come out to cheer me on!  Despite the fact that I felt like I was going really slow I ended up being really happy with my time.  I ended up sort of leap-frogging with a really nice woman named Gail who was speed walking while I did my run/walk routine.  It was nice to have someone to chat with as we passed each other.

At the end of the run we got a free bag of popcorn and beer.  I didn’t win the costume contest – Gail did!  She was dressed like a witch.  There was also a group that was dressed as Mario Cart with their little kids – it was adorable and they won best group costumes. 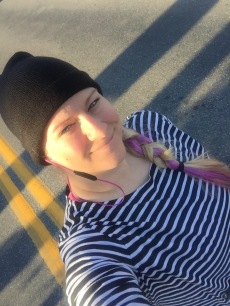 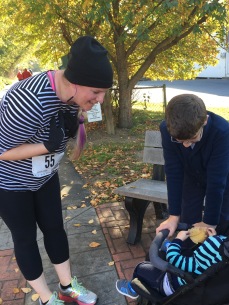 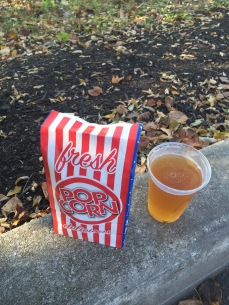 After hanging out with my family for a bit, I headed home and Kevin and I waited for my OTHER sister and her husband to meet me at my house.  Then the 4 of us headed to Philly to participate in the Black Light Run which started at 7 PM.  I have done a bunch of Color Runs in the past and I think they are so much fun.  A few years ago I did a Glow Run which is another night time 5K and they had strobe lights making it hard to see where you were stepping.  That trail had a lot of potholes in it so I was worried this run was going to be the same.

I have to say I was a little disappointed in this event.  We had fun, but they ran out of the color powder to throw on people at the 3rd color station and we were in the middle of the pack so the majority of people didn’t get hit at that station.  Also there were only 3 color stations which was a bummer.  It was very dark and some of the roads we were on were horrible with lots of potholes, but I just pulled my phone out and used the flashlight.  Other than the 3 color stations, they had a few black lights set up here and there.

I did like the fact that they had the DJ going BEFORE the run started and were handing out color packets, but they didn’t do any count downs so people seemed to throw the packets whenever, which is still fun don’t get me wrong, it just looks way cooler when a bunch of people throw them at the same time!  People also had this yellow liquid that looked like Hi-Liter fluid and were splashing it on people because it glowed under the black lights.  We did have a lot of fun, but I doubt I would do this one again. 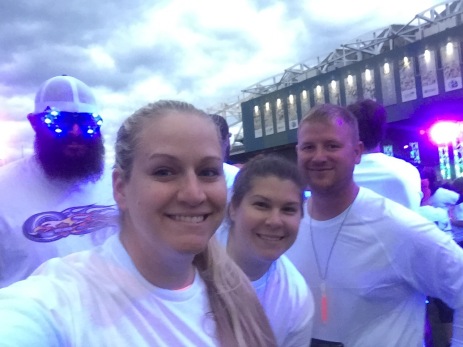 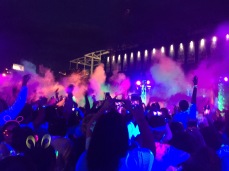