We were rained out of our camping trip, but I happened to see that the weather at Assateague Island was supposed to be nice Saturday until the evening.  We were able to book a last minute pet friendly hotel in Ocean City, NJ so we loaded up the bikes along with the Doggyride and the 3 of us headed to the beach!

Once at Assateague we hooked up the Doggyride to Kevin’s bike first and took off.  We were a little unsure how she would do in her Doggyride because this would be the longest ride yet – add that to the fact there are so many sights, sounds and smells!  I let them go ahead so I could watch Joey to see if she was going to try to jump out.  If it looked like she was thinking about it I would say “Joey no.  Lay down!” and usually that was enough to get her to settle back in.  We’re so lucky we have such a good pup!

Cycling along the bike trail we passed many people out enjoying the sunshine.  They would all get a huge smile seeing Joey in her cart – and as there weren’t a ton of horses around when we were there she was the main attraction.

We cycled from where we parked at the National Seashore up to the parking lot at the State Park and back.  There were some pretty strong headwinds on the way back so we attached the Doggyride to my bike and I took the next shift – exploring the rest of the National Seashore.

We cycled about 10 miles before we were back at the car.  I tell you about the bugs every time I blog about Assageague and this time was no exception.  Kevin and I were amazed at the amount of bug bites we got even though we were constantly on the move.  Once we packed up the bikes we took Joey for a short walk along the beach – which she usually loves, but this time she seemed tired.  Maybe all the hard work she did on the bike ride?  🙂 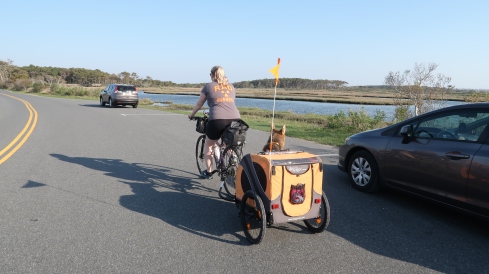 We were so thankful we had a hotel room to stay in because a really nasty storm raged outside for most of the night.  We drove back to Assateague the next morning as we usually do for one last loop around the island before we headed home and almost all the tent campers had cleared out.  Then we got to a section where there were a TON of broken tents, chairs, tiki torches and various other damaged camping equipment piled up behind the dumpsters.  YIKES.  Another reason I don’t go camping in bad weather!