I couldn’t believe my luck – Mother Nature was FINALLY letting me have a rain free weekend so I could go camping!  When we saw how beautiful the weather was going to be we packed our camping gear and began the long drive to Presque Isle State Park in Erie, PA.

I was very worried we wouldn’t get a campsite where I was hoping to stay so we left as early as we could.  That particular campground was first come/ first serve.  I have never stayed at a campground that doesn’t let you reserve ahead of time so I didn’t know what to expect.  When we arrived we went to check in and the friendly staff informed us there were a few campsites left and gave me a map of the campground.  She told me to go check the sites out and if I liked any we could set up and then come back and pay.  We drove around the campground and it looked like the tent sites were very close together – people had their stuff everywhere and I didn’t understand where we would park.  The sites were so small there wouldn’t have been anywhere to put all of our things.  We decided to backtrack to another campground where I knew would have actual designated spaces.  We set up at the new campsite – and headed back to drive the loop around Presque Isle State Park.

As we looked around we noticed a ton of these little fuzzy things floating around.  They appeared to be little seed pods and no lie- it looked like I was in the Upside Down from Stranger Things every time the breeze would send a bunch floating around.

Early the next morning we loaded up the bikes and the doggyride and headed back to Presque Isle.  We found a place to park and started around the bike path that forms a complete loop around the park.

The bike path is about 14 miles, fairly flat, completely paved, and most of it is separated from the road.  There were so many flowers blooming and various wildlife right along the path, add to that the views of Lake Erie I was in cycling heaven!

Kevin took over pulling Joey at the Perry Monument which was about the half way point.  Then we were off to the side of the island where all the beaches are!  I wanted to hike to Gull Point, but the trail was closed so we continued cycling to the Presque Isle Lighthouse and then back to the car.

We realized we were parked in an area where dogs weren’t allowed on the beach so we ended up driving the loop again to find a place where Joey could get out and play.  The dog friendly beaches of Presque Isle are between Barracks Beach and Beach 6.  There are a few other very small sections where dogs are allowed on the beach as well. 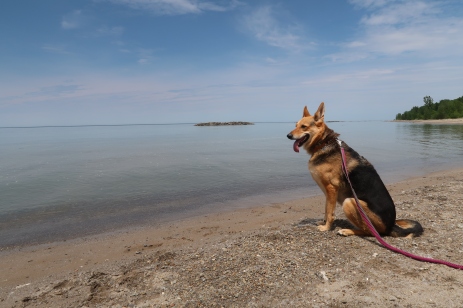 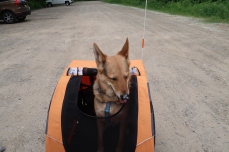 the fuzzy seeds ended up everywhere – even on her nose! 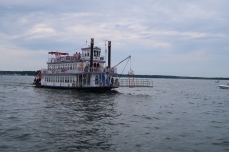 I absolutely LOVED Presque Isle – put this on your bucket list of places to visit and GO – ASAP!  🙂