The Ironmaster’s Challenge is a 50K or a 15K trail run or hike at Pine Grove Furnace State Park – I like hiking and I like running so why not try out a trail run and see how it goes?

My friend Gerard signed up with me – it was his first trail run (or any official kind of run at all).  We were instructed to arrive around 8 which would give the 50K runners a chance to check in and start and we wouldn’t be in their way.  My nerves were going crazy – I had no idea what to expect or how the trail was as I have never been to this area.  I was thinking it would be sort of like hiking to the Pinnacle and back based on the elevation listed on the Ironmasters web site and the length of the trail we were doing.  After completing the 15K I would say that was a pretty good guess except it was steeper in some sections.

Once we checked in I got in line to use the bathroom while G ran some stuff back to the car.  While waiting in line for the bathroom I ran into a fellow instagrammer Amy AKA willrun4icecream, we started following each other after the Hershey 10K, so it was nice to chat with her.  We tried to look for each other later , but there were just too many people at the start line. 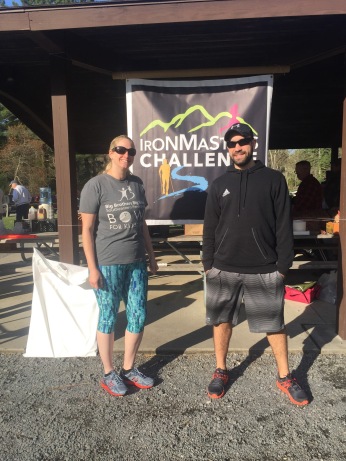 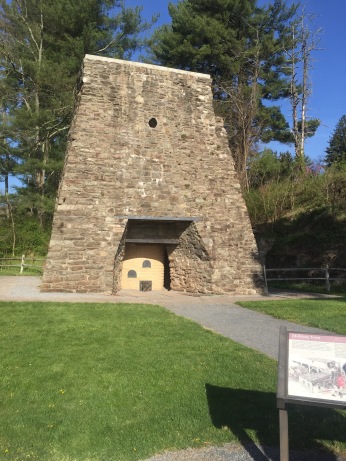 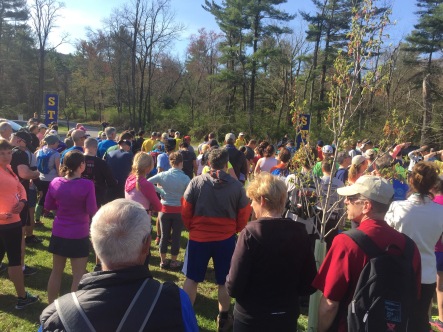 everyone waiting to start! 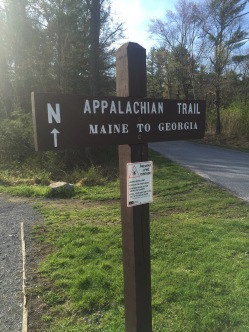 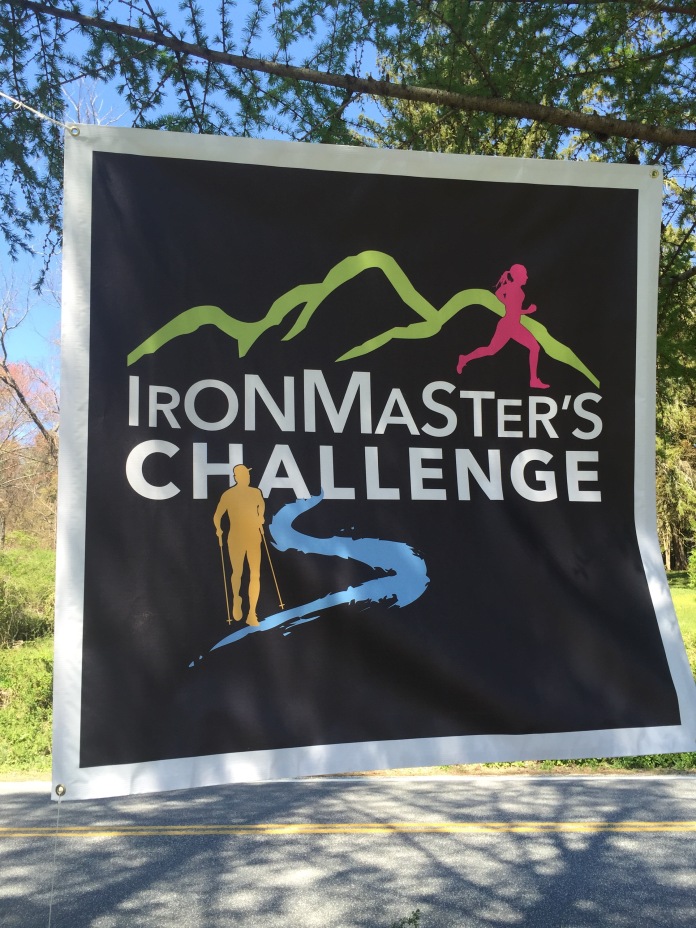 I told G to just run ahead because with my allergies and asthma I had no idea how I would do.  We started off together and I was using my interval timer at first, but once we started going uphill I just turned it off as it was too much for my lungs.  Pretty early in the run I held back and didn’t say anything to G as I didn’t want him to feel like he needed to wait for me.  Once we started the first incline I started having doubts about what I was doing – I wasn’t worried that I couldn’t do it – I just never hiked so fast in my life and I felt very pressured to keep moving.  I figured I would finish around 3 hrs and I wanted to finish before the 50k runners started coming in (mostly because I didn’t want to be in their way).  🙂

It was really hard to pass as the trail was not wide at all – it was a weird feeling knowing and hearing people literally right on my heels – I didn’t know if I was supposed to step off the trail and let them pass or what – it sort of seemed to work itself out, people passing where they could.  The terrain was very rocky in areas and I was happy I could practice hopping rocks – this is ROCKSYLVANIA by the way.

I was on the fence about bringing trekking poles on this – I read online some people use them for trail runs and some don’t – I pretty much always use them for hiking, in the end the decision was made for me as I forgot them!  I also used my new trail runners instead of my hiking shoes – I see a lot of people hike in trail runners now and wasn’t sure if I would like it – I think I will hike in them from now on actually – they were so comfy (it was like I was walking on clouds) and the tread was AMAZING – no blisters or anything the entire time (come to think I don’t have any bug bites either – will I have to change my blog name??).  🙂

My favorite thing about the day was talking to the other people – asking if they had done the event before, etc.  Every single person I spoke to from the other hikers/runners to the volunteers were so friendly.  I decided pretty quickly I was going to become one of the hikers.  At some point early in the trail I started chatting with a girl named Leann – we ended up sticking together and finishing the trail side by side.  She had done the practice hike so she knew what the trail ahead would be like which was a great advantage for me – it was nice to know what was coming up.  She was worried about me as I stupidly didn’t bring any water- if I do this again I am definitely getting one of those running bladders.  Heck, people were carrying everything from backpacking packs to babies in carriers on their back!

I was able to grab some Gatorade at the first rest stop and then we began the second and steepest/highest incline on the trail. Up and up we went, the view from the top was very pretty and I think someone said it was called Sunset Rocks. 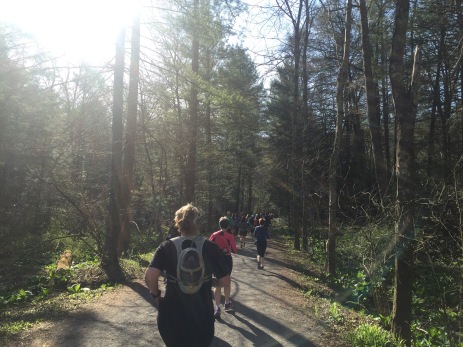 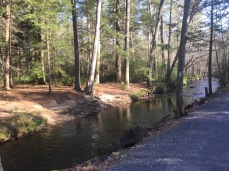 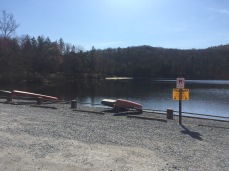 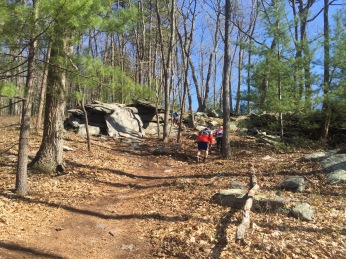 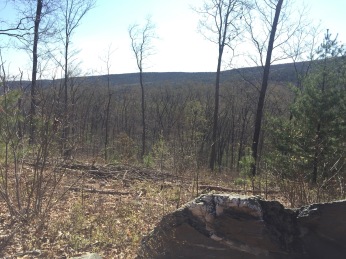 The 2nd rest stop was well stocked with drinks and different energy snacks – I took a few with me and Leann pointed out that there were bottles of water – so I was able to snag one of those to take too.  We continued down the trail,  luckily we noticed the trail took a sharp right – I almost continued straight, but saw all the flags at the last minute.  After that there was a few creek crossings that got progressively deeper – I was a little bummed to get my new shoes wet and muddy, but I guess it would have happened eventually right?  I tried at first to hop on the rocks, but by the last creek crossing I just sloshed my way through – my feet were wet anyway and we only had 2 or 3 miles to go.

At one point we were very surprised to see another table set up in the middle of the woods with a few cups on it.  “This wasn’t on the cue sheet” I said totally confused.  Leann agreed and I was worried we somehow got lost and ended up on the 50K trail.  Then I see a guy walking over and say to a runner “Oh bring that cup back – I don’t have many so I am washing them out and reusing them”  YUCK! What the HECK was going on?!?!?!  It wasn’t til the end of the race when I met back up with G and we all started talking that they said he was serving vodka in the cups on the left and a little water in the ones on the right – and yes he was rinsing the cups out and reusing he few he had.  Double yuck.  So apparently he had nothing to do with the Ironmaster’s Challenge and just set up a table along the route.  I’m not sure how I feel about that – on the one hand it’s a nice gesture, on the other I’m sure I’m not the only one who didn’t know that some of the cups were vodka – I can’t imagine running by and slamming down a cup of that – holy cow.  Plus I don’t know if everyone who ran was over 21?  I don’t know but anyway Leann and I chose to skip this station.

The miles were passing by – then we reached a sign that said 15K – what??  This was so confusing because I had no idea how much farther we had to go and as someone who likes to set mini goals for myself, this was semi disappointing that we were at 15K and not finished yet.  We continued to hike and eventually ended up on a road that looped us back down and then up to the finish, which was a little confusing on where we were supposed to go.

Finally we were at the finish line – this is the longest race I have done so far – I completed the 15K (which ended up being like 10.something miles according to my GPS) in 3 hrs 13 mins – I was happy with that time as I estimated it would take me 3 hrs.  About 10-15 mins after Leann and I finished the first 50K runner came barreling through the finish line.  He was covered in dirt and mud with a skinned up knee and collapsed after he crossed the line – people were pouring water over his head to cool him down.  I have no desire EVER to run to the point of collapse- I mean amazing accomplishment, but wow, that is not for me.

We got 2 free beers for completing the race and food (no vegetarian options, so I just ate a roll- LOL).  They had cider ale that was yummy and was very refreshing after the run.  We hung out, chatted and took a few pictures before heading home. 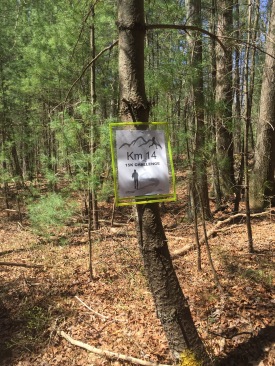 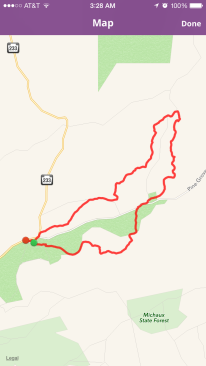 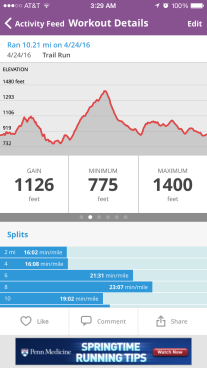 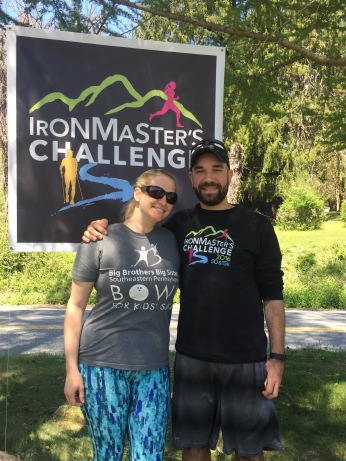 G & I at the finish line 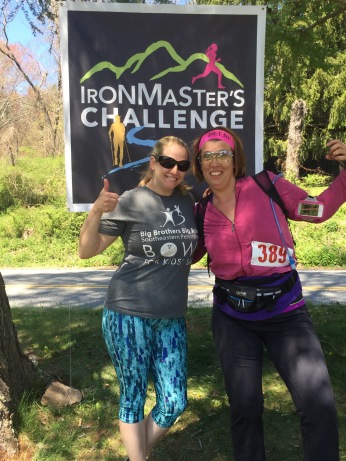 I would probably do this event again, but honestly I was sad I didn’t have enough time to enjoy the views.  I spent most of the time looking down to make sure I wouldn’t trip.  I usually take a ton of pictures and just didn’t have time during this.  At one point I was able to hear the wind in the leaves and tall grasses – that is such a soothing sound so I had to stand for a tiny bit to enjoy it.  Too often we are rushed through life and while this event was exciting, well run and I met a bunch of amazing people, I felt like I had to finish as fast as I could – I mean it IS a race after all!!  I can’t say for sure I will be a trail running fiend – I definitely like road running better – but it was a great challenge to see what I am capable of.

I would also bring extra shoes and socks to change into because my feet were soaked by the end of the run (my poor shoes! LOL). 🙂

Overall it was a great day – the weather was PERFECT and I got to spend it with friends old and new.  Happy trails!! 🙂

Had a fun walk today for #optoutside day even though the rest of the usual crew that goes w me is sick 😷
found a new mural!! 😍🚲 or maybe it was always there and I just never saw it because there are so many
Today’s bike commute- I get soo excited when I am able to spot them 😊
Oh so pretty!!! Leaves falling all around! Such a great day to bike commute in PA! 😊💗
Dreaming of this place on this rainy PA day
😊 beach+ treats+doggy ice cream = JoJo has the best week ever!! 🐾💗
Assateague is one of my favorite places in the world- I was soo excited to catch this guy hanging out by the sign Friday- he was actually scratching his butt on it but I wasn’t able to get a video of that 🤣🤣
Such a pretty day for a hike!
I just can’t get enough of these murals!
💗🚲
Look at this awesome mural I cycled past today!!! 💗😍😊
Some lovely black eyed susans on the trail!
Checking out some cool trails with my nephew! 💗🚲 we both agreed that it was eerie when we got to the abandoned road!
Taught my nephew about blazes on our last hike! 😊
Morning ride to work!! 💗🚲
Great day for a “hard hike” with my nephew!
Blog post and YouTube video now up from my awesome trip to Pine Creek Gorge!! 💗🚲
Took my nephew on a short hike today! It was super HOT but we still had fun! 💗😊